Our Lady of Lourdes

Our Lady of Lourdes, France

Up until 1858, the French town of Lourdes situated at the foothill of the Pyrenees mountain range bordering Spain, was a quiet and modest place, home to some 4000 odd people mostly engaged in agriculture. 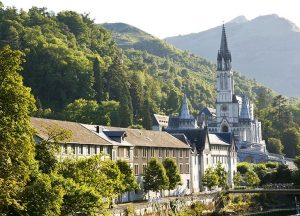 Lourdes with the Pyrenees range in the background

It was in this year, Bernadette Soubirous experienced a series of Marian apparitions that changed the history of Lourdes forever. The sprightly girl then barely into her teens was to bring to her town, the kind of international attention and fame which in course of time would translate to millions of pilgrims descending on it each year. The next few months were transformational, firmly placing Lourdes high up in the Catholic world view and Bernadette on the path to sainthood. 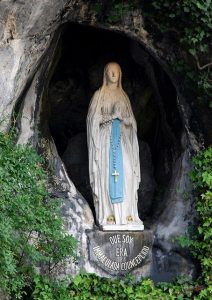 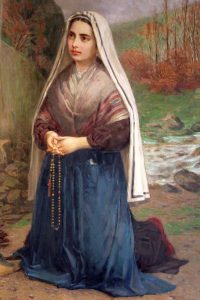 In a series of 18 appearances occurring between 11 February and 16 July 1858, Bernadette the eldest daughter of a miller, is said to have experienced Marian apparitions, of a woman who identified herself as the ‘Immaculate Conception’. The doctrine of the ‘Immaculate Conception’ had been introduced only four years pre-dating the event and it is unlikely that Bernadette Soubirous would have ever heard of it.

The first incident on 11 February 1858 occurred when Bernadette was out in the countryside near the grotto of Massabielle, gathering firewood along with her younger sister Toinette and a friend. In order to cross a little stream that flowed in front of the grotto without getting her stockings wet, Bernadette stayed behind to remove them while the other two waded through. 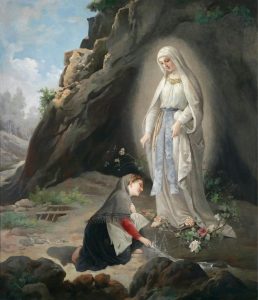 In the words of the young Bernadette, from behind the dark alcove in the grotto ‘came a bright, dazzling light and a white figure’. This apparition would appear to her in a series of visions, giving rise to the worship of Our Lady of Lourdes, in generations to come. 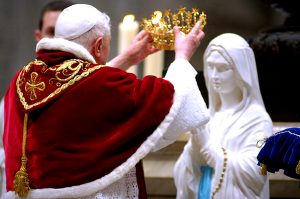 At first, her Bernadette’s mother was embarrassed with her daughter’s narration of the visions and tried to forbid her from returning to the grotto. However the consistency in her story about a lady wearing a white veil, a blue girdle and with a yellow rose on each foot, which approximated to a description of the Blessed Virgin, started gaining acceptance among the townspeople who had initially taken her to be someone suffering from mental delusions. 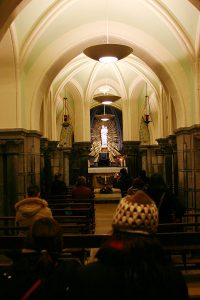 The Crypt, the first chapel at Lourdes

On 24 February, Bernadette stated that the apparition of the Blessed Virgin asked for prayer and penance and for the conversion of sinners. In the vision that occurred on 25 February, the apparition asked her to dig a hole in the ground and drink of the spring which she found there. To her astonishment, a stream of muddy water flowed out from the ground, which soon cleared in colour. From the clear stream that now flowed was born the miraculous water of Lourdes, and soon became a commodity much sought after by pilgrims to Lourdes. Those who suffer from a variety of ailments make the trip to Lourdes and many of them have claimed a cure. 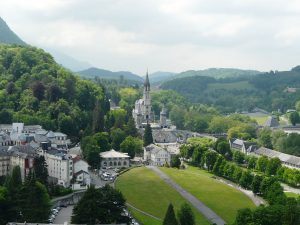 The Sanctuary of Lourdes

In order to examine all claims of cures properly and in a scientific manner, the Lourdes Medical Bureau was formally established in 1905 at the request of Pope Pius X. It must be noted that cases since 1859 has also been subjected to medical scrutiny by a series of official and semi-official medical bodies, prior to the setting up of the Bureau. 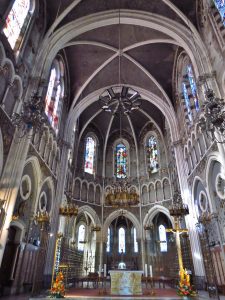 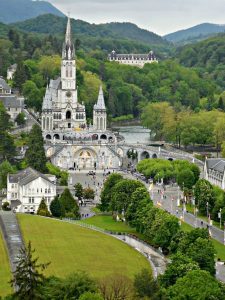 Of the approximately 7000 patients who have asked to have their cures declared as miracles, only 69 have been declared as a scientifically inexplicable miracle by both the Lourdes Medical Bureau and the Catholic Church. 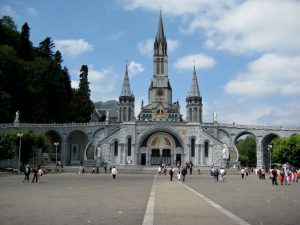 The Rosary Basilica at Lourdes

At the thirteenth appearance of the apparition on 2 March, Our Lady of Lourdes is reported to have instructed Bernadette to have a chapel built and a procession formed in her honour. The Sanctuary of Our Lady of Lourdes was built in deference to this request. There are two processions held every day. The Blessed Sacrament procession is conducted at 5:00 pm, while the Torchlight Marian Procession takes place daily at 9.00 pm. 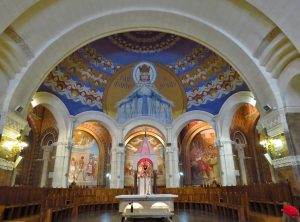 The altar of the Rosary Basilica

Today there are many chapels and Basilicas inside the Lourdes complex. The oldest and also the smallest of these is the Crypt which was completed in 1866. 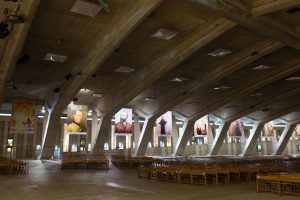 The Basilica of St Pius X, also known as the Underground Basilica

The largest is the enormous Basilica of St Pius X, also informally referred to as the Underground Basilica, which is almost entirely underground and is designed to hold 25,000 pilgrims. It was built in 1958 as part of the Centenary of the Visions, in anticipation at the massive influx of worshippers for the event. 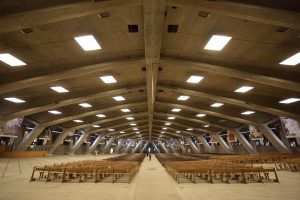 The body of St Bernadette Soubirous is displayed in a specially constructed crystal coffin, and housed in the Chapel of Saint Bernadette at the abbey where she served as a nun in Nevers, France. Her body was exhumed thrice in 1909, 1919 and 1925. The first time was more than 30 years after a death, when her body was found to be largely in-corrupt and free from decomposition. The state in which her body was found was cited as one of the miracles to support her canonisation. 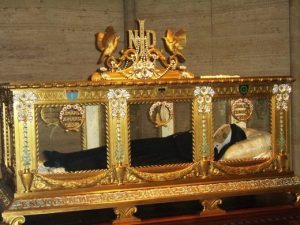 The body of St Bernadette Soubirous

Lourdes is a bustling town that is about 825 kms away from Paris. It can be accessed using a variety of modes. The most popular is the TGV intercity high-speed train which takes 6 hours, bus over 12 hours and driving by car takes about 8 hours. One can also fly to the nearest airport of Tarbes-Lourdes, which is a 20 minute drive from the town. 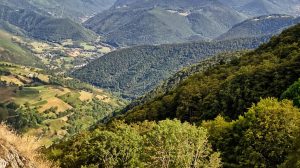 The Pyrenees mountains that separate France and Spain

Millions of pilgrims visit Lourdes each year, particularly Roman Catholics, but including members of other denominations too. It is one of the most visited Catholic and Marian pilgrimage spots in the world. 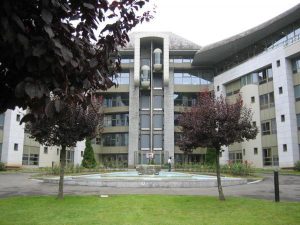 Making the journey are substantial numbers of sick pilgrims, who visit in the hope and faith that Our Lady of Lourdes will cure them of their ailments. Accueil Notre Dame, a modern facility to house sick pilgrims was newly built in 1996. The opportunity to be nearer to God, in an atmosphere of Marian devotion, has been one of the many reasons for the huge popularity of Lourdes.