You can view the video here:

This is the slideshow presented at the event:

The history of western art and Christianity have been intertwined almost since their inception. Art inspired by faith created a genre that vastly enriched our culture. The best-known examples of this art are the masterpieces of the Renaissance, prominent of which are the works of Michelangelo, Raphael, Botticelli. Yet, the use of art as an instrument of evangelisation predates the Renaissance by over a thousand years.

Patrick van der Vorst takes us on a historical tour showcasing the use of art by the Church in its evangelisation. And why art will play a significant role in spreading its message in the future. Patrick has spent a lifetime in art- first as a Director with Sotheby’s of London, then as founder of the websites valuemystuff.com and www.christian.art. Get ready to be enthralled!

Patrick spoke of the influence of art since the early Christian era. Much of the art of this era has its roots in pre-Christian civilisations. Prominent influences are the Greek and Roman, which were the predominant societies of that period. The acceptance of Christianity by the Roman Empire laid the foundation for one of the significant art forms of the coming centuries.

A noteworthy inflexion point in the history of Christian Art came about in the eighth century. Islam had by now gained ground, and most of the Holy Lands were now in control of its adherents. Islam explicitly prohibits idolatry. One of the consequences of Muslim rule was the destruction of sculptures and images used in Christian worship.

St John of Damascus (676-749 AD), who hailed from a Damascene Christian family, took up cudgels on behalf of the Christians. He based his argument on the fact that Jesus, who was the Son of God, was represented in the likeness of man. If that was good enough for God, then it was certainly good enough for men.

Christian Art which until then had been influenced by Greek and Roman civilisations, now began to create an identity for itself. If St John of Damascus had not stood his ground, Christian Art might not have progressed on the lines it subsequently did. There probably would have been no Renaissance, and figures like Michelangelo might not have emerged.

The session concluded with a lively question-answer session. Viewers posed an array of questions to be masterfully answered by Patrick. Art is a topic that is always interesting- reflected in high audience engagement levels all through the show. 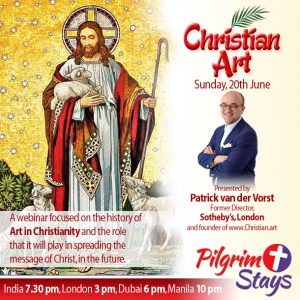 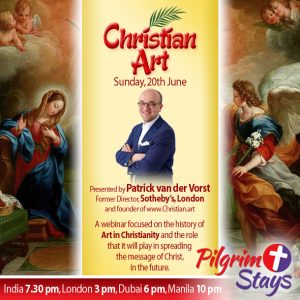 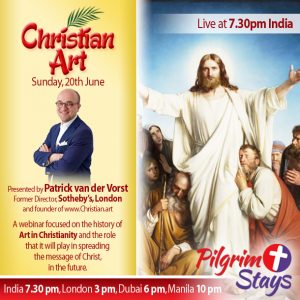