The Way of St James

The Santiago de Compostela or the Cathedral of Saint James the Great in Santiago, Spain is a UNESCO World heritage site, built over the burial site of St James, one of the first Apostles of Jesus. It is located in the region of Galicia, in north-western Spain and is the destination of a very popular pilgrimage route- the Way of St James or the Camino de Santiago. St James is believed to have preached the Gospel in Galicia, soon after the death and resurrection of Jesus. Upon his return to Jerusalem in 44 AD he was captured and beheaded by King Herod. 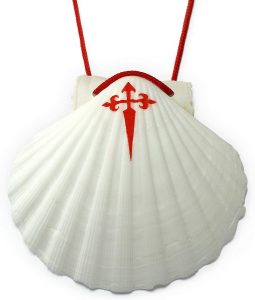 According to Christian tradition the body of St James was shipped by his disciples from Jerusalem to northern Spain, where it was buried in what is now the city of Santiago de Compostela. While the ship was still off the coast of Spain, a storm besieged the ship and the body was lost to the ocean. It however washed up ashore undamaged, but covered in scallops. It is for this reason the scallop shell often found on the shores in Galicia, is associated with St James the Great and for long been a symbol of the pilgrimage. This is a pilgrimage that has remained as popular as the journey to the Holy Land or Rome, right from the medieval times to the present day. 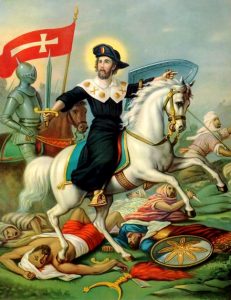 St James is the patron saint of Spain, and it is a widely held belief that he was given by God to Spain as patron and protector. According to tradition, St James is said to have miraculously appeared to fight for the Christians in the mythical battle of Clavijo, to expel the Moorish occupiers of Spain. He was referred to as Santiago Matamoros or Saint James the Moor-slayer after that battle. The cry ‘Santiago, y cierra, Espana!’ or ‘St James and strike for Spain’ was the battle cry for generations of Spanish Armies in medieval times. 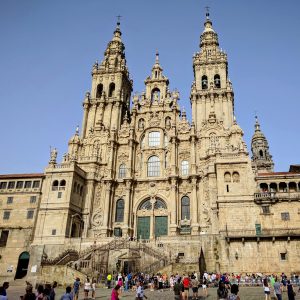 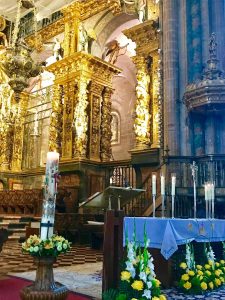 Many kings and monarchs have undertaken and completed the gruelling journey on foot. It is no wonder that pilgrimage to the Santiago de Compostela has remained popular since medieval times and continues to be so to this day. 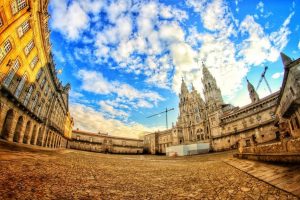 Known as the Camino de Santiago in Spanish or the Way of St James, it is actually the name for a network of multiple pilgrim routes to reach the Cathedral of Saint James the Great. Ever since the Middle Ages the pilgrimage was indulgenced, meaning a pilgrim who undertook the journey would earn a plenary indulgence and thus gain remission in the after-death punishment for his sins. 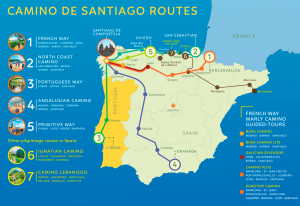 The Way in reality is actually one of dozens of pilgrimage routes to the Santiago de Compostela. Considered a spiritual break from modern life most of the pilgrims undertake the journey by foot, some by bicycle and a few, as in medieval times, on horseback. The route was well travelled during the middle Ages, but events like the Black Death plague, the Protestant Reformation and political unrest led to its gradual decline in modern times. 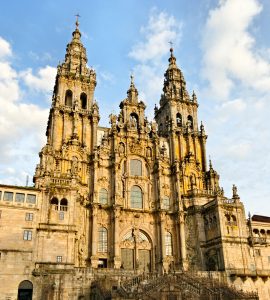 In October 1987, the Council of Europe declared the Way of St James as one the first European Cultural Routes. Recognition in later years by UNESCO as a World Heritage Site led to the pilgrimage’s revival. In 2017 over 300,000 pilgrims undertook the journey thus regaining its erstwhile popularity. 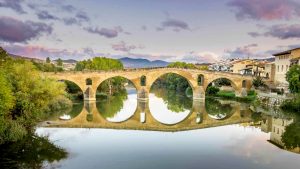 A bridge en route the Camino Francés or French Way

Of the multiple routes available to complete the pilgrimage, the Camino Francés, or French Way, is the most popular. There are many starting points to commence the journey within France- the most notable ones being Arles, Paris, St Gilles, Vézelay and Le Puy. Historically, the French border with Spain in the Pyrenees has been considered as the natural starting point. Saint-Jean-Pied-de-Port on the French side of the Pyrenees, and Roncesvalles on the Spanish side are by far the most common rallying points to begin the pilgrimage from. The distance from Roncesvalles in the Spanish Pyrenees to the Cathedral of Saint James in Santiago, and passing through León is approximately 800 kms. 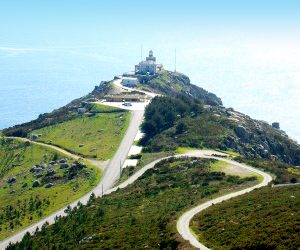 Cape Finisterre, in Roman times it was believed to be the end of the world

Next in popularity is the Portuguese Way or the Camino Portugués, which commences from the Metropolitan Cathedral of St Mary Major in Lisbon, is 610 kms away from Santiago. Pilgrims from the northern part of Portugal, and also foreigners arriving at the sea port start from the Church of São Martinho de Cedofeita in Porto which is 227 kms away, and enter Spain crossing the Minho River at Valença. 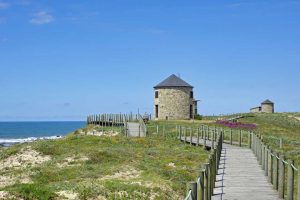 The beach front Caminho da Costa that runs along the sea

Traditionally two routes from Porto to Santiago were widely used- the inland or Central Way and the Caminho da Costa or the Coastal Way. Of late the Coastal Way has a variant using mostly beach walkways that run along the coastline, and on which cycles are not permitted. Contemporary pilgrims prefer this route as the traditional one has been urbanised, hence the route passing continuously along the sea is considered more pleasant. 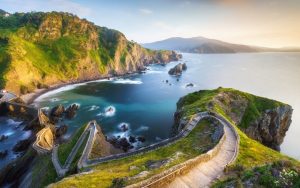 The breathtaking Camino del Norte or the Northern way

The Northern Way or the Camino del Norte is another route but is less popular than the first two. It starts in the Basque city of Irun which is on the Spanish border with France, but because of the changes in the elevation of the route it is less preferred. This is in contrast to the Camino Frances or the French Way which is mostly flat and therefore less arduous. 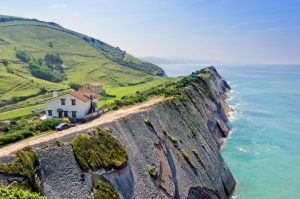 The Northern Way runs along the coast following the Bay of Biscay until it nears the destination of Santiago. This route was used during the period of Moorish occupation of Spain, as a means of avoiding travelling through the territory held by the Muslims. 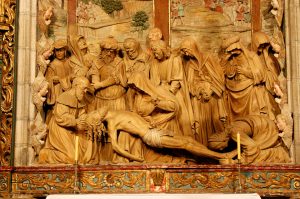 Altar of Mondragon Chapel inside the Santiago de Compostela

There are only three cathedrals or basilicas that have been built over the tomb of an Apostle. Besides the Santiago de Compostela Cathedral, the other two are St Peter’s Basilica in Vatican City and St Thomas Cathedral Basilica, in Chennai, India. 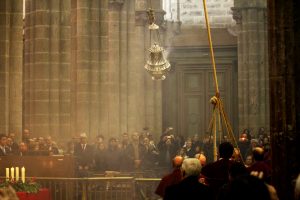 The Botafuemeiro, one of the largest incense burners in the world

The Santiago de Compostela has a censer or thurible to burn and disperse incense amid the congregation. Measuring 1.5 metres and weighing 53 kgs, it is said to be one of the largest such incense burners in the world. Known as the Botafuemeiro in Spanish it hangs suspended 20 feet above the surface and requires a team of eight (known as tiraboleiros) to swing it across the cathedral at great speeds. 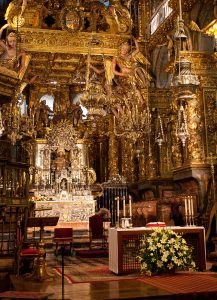 It is not unusual to find pilgrims who have completed the entire walk to be in an ecstatic mood at journey’s end. The Camino has long been considered a life-changing experience by those who have lasted the enduring journey. A Compostela or a certificate of accomplishment is given to every pilgrim who completes the Way of St James. In order to earn the compostela, a pilgrim would need to walk a minimum of 100 km or cycle at least 200 km. Many pilgrims prefer to start from the closest point Sarria, which is roughly 100 kms away and has convenient rail and bus connections to other parts of Spain.