Basilica of St Paul Outside the Walls

Erected over the tomb of St Paul the Apostle, the Basilica of St Paul Outside the Walls (Basilica Papale San Paolo fuori le Mura) is one of only four Major Basilicas which exist in the world. The other three Major Basilicas are St Peter’s Basilica, Basilica of St John Lateran and Saint Mary Major (Basilica di Santa Maria Maggiore); all four major basilicas are located in Rome. This basilica is the second only to St Peter’s Basilica in size. Tracing its origins to the martyrdom of St Paul around 67 AD, the Basilica of St Paul Outside the Walls has been considerably enlarged and renovated over the centuries. 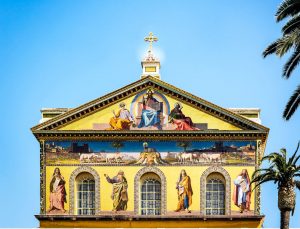 The story of Paul or Saul of Tarsus as he was originally known, begins with his conversion to Christianity during his famed journey from Jerusalem to Damascus. Born in the ancient city of Tarsus which today is in south-central Turkey, Paul belonged to a Jewish Pharisee family which had sent him to Jerusalem for his studies. In the New Testament book, the Acts of the Apostles, Paul is said to have persecuted some of the early Jewish converts to Christianity. These were probably the Hellenised or Greek-speaking Jews, settled in the areas surrounding Jerusalem. 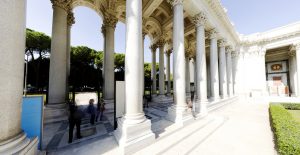 The entrance to the Courtyard

The conversion is said to have occurred while Paul was travelling horseback on the road from Jerusalem to Damascus, on a mission to capture the early Christians and bring them back to Jerusalem. 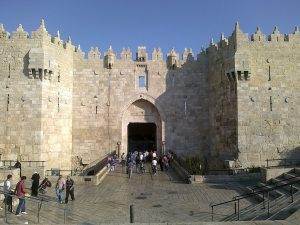 Damascus Gate, one of the main entrances to the Old City of Jerusalem

According to the narrative of the Acts, the ascended Jesus appeared to Paul in a great light, who blinded by it fell to the ground. The Acts further state that Paul heard a voice asking him ‘Saul, Saul, why are you persecuting me?’. To which Paul asked ‘Who are you, Lord?’. The voice replied ‘I am Jesus, whom you are persecuting. But rise and enter the city, and you will be told what you are to do’. 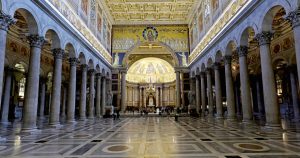 The Central Nave of the Basilica

Paul was blinded for three days following the vision, during which he took no food or water but spent his time in prayer. He was led into Damascus by the hand, where Ananias of Damascus arrived and restored his eyesight. With his sight restored, Paul rose and was baptised. From this point on, Paul was one of the most ardent missionaries who took as his life’s work, the task of spreading the teachings of Jesus to the farthest corners of the Roman Empire. In the synagogues the very people who had seen him persecute Christians in Jerusalem were astonished to see Paul proclaim Jesus as the Son of God. 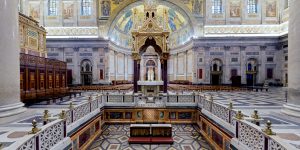 The altar and crypt containing the tomb of St Paul

By the year 57 AD, some of the Jews of Jerusalem were sufficiently incensed against his missionary activities to plot his death. Being a Roman citizen, he had the right to appeal unto Caesar and accordingly he was transported back to Rome. He was sentenced to death by decapitation by the Emperor Nero and was martyred between 64 and 67 AD. Paul is said to have been executed at the Aquae Salviae, on the Via Laurentina in Rome. Legend has it that on decapitation, Paul’s head rebounded thrice on the ground, each spot giving rise to a source of water. This is how the place St Paul at the Three Fountains or San Paolo alle Tre Fontane got its name. 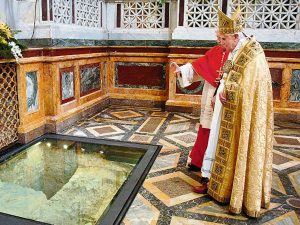 The tomb of St Paul

His body was buried in a necropolis which formed part of an estate, located outside the walls of Rome and belonging to a devout Christian woman named Lucina. Being a Roman citizen, St Paul was entitled to be buried in a Roman necropolis or burial ground. Shortly after his martyrdom, his disciples erected a memorial where during the first centuries of persecution of the Christians it became a place of veneration. Many of the faithful and pilgrims would go to his tomb and pray to draw strength to weather the relentless persecution that they faced. 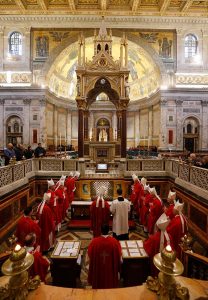 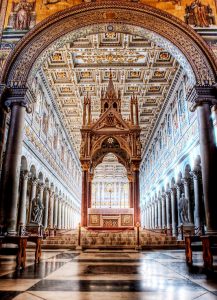 Cut to the fourth century. Emperor Constantine the Great who ruled the Roman Empire between the years 306 to 337 AD, proclaimed the Edict of Milan in 313 AD which established tolerance towards Christianity. His conversion to Christianity was a great boost to the faith. The Emperor ordered the first church to be built above the tomb of St Paul, which is the spot where the current basilica stands. Pope Sylvester I consecrated the basilica on 18 November, 324 AD.

By now the Basilica had begun to attract large numbers of pilgrims and soon proved inadequate to handle the influx. In the year 386 AD, Emperor Theodosius I began work on a new basilica which was built in the Byzantine style with its orientation being changed from East to West. Consecrated by Pope Silicius in 395 AD, it measured 131 meters in length, 65 meters broad and with a height of 30 meters. 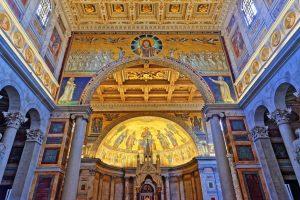 Built with a large central nave flanked by four lateral naves it was supported on the sides by 80 monolithic granite columns. Work on the basilica was not completed until the time of Pope Leo I, whose pontificate extended from 440 to 461 AD. By the time it was completed it was the largest Roman Basilica until the reconstruction of St Peter’s in later years. 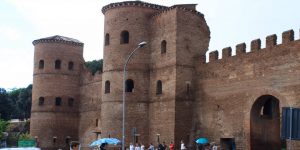 The Aurelian Walls, an ancient protection for the city of Rome

In the year 846 Rome was attacked by Arab raiders from North Africa. The basilicas of Old St Peter’s and St Paul’s Outside the Walls were desecrated and looted. The intruders could not enter the main city due to its robust fortifications known as the Aurelian Walls. By then the Lombard Army from Northern Italy reached Rome and pursued the raiders until Centumcellae where they boarded their ships to flee with their booty. As a form of divine retribution, a huge storm destroyed many of their ships, washing ashore corpses of the plunderers adorned with the stolen jewels. 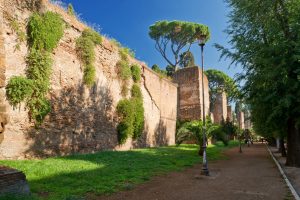 In the aftermath of the attack, Pope John VIII (872-882) began construction of a fortified wall to protect the Basilica, its Abbey and the dwellings of the townspeople from future invasions. The town so formed by the encircling walls was named Johannispolis or Giovannipoli in Italian. It existed for the next few centuries until an earthquake in 1348 completely destroyed the town. 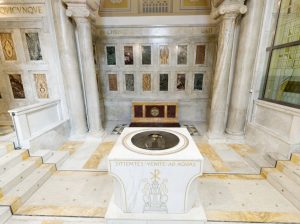 The Baptistry inside the Basilica

Popes down the centuries have always looked upon this most important of Basilicas with greatest favour. Pope Innocent III (1198-1216) was responsible for the construction of the large mosaic which is 24 meters wide and 12 meters in length. It has since been restored despite damage suffered during calamities like fire and earthquake. In later years, Pope Honorius III invited the same team of Venetian artists who had beautified the Basilica of Saint Mark in Venice, to lend their artistic touch to the Basilica of St Paul Outside the Walls. 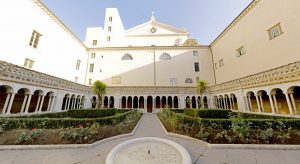 The Abbey of the Basilica

On account of the artistic treasures that the Basilica held its fame spread not just as the resting place of St Paul, but also a veritable treasure-house of Gothic,Byzantine and Paleo-Christian works of art. Some of them include the Gothic baldachin, located above the sarcophagus and the Papal Altar, a work by Arnolfo di Cambio; the Candelabrum for the Paschal candle created by Nicola D’Angelo and Pietro Vassalletto; and the facade by Pietro Cavallini. 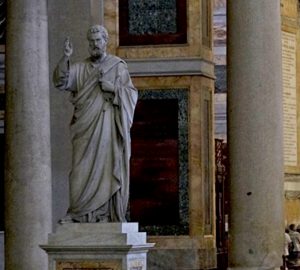 The statue of St Peter

The interior of Basilica of St Paul Outside the Walls is a marvel in itself, supported by enormous columns of marble and decorated by gold mosaics. 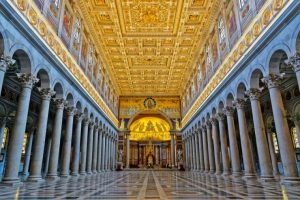 The central nave with its magnificent gold mosaic

Unfortunately in 1823, a great fire engulfed the Basilica and most of the edifice was destroyed. It was rebuilt soon after, using whatever could be salvaged from the burnt ruins of the medieval basilica, and recreating it to the splendour that existed prior to the inferno. 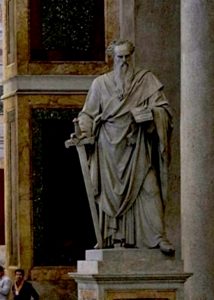 The statue of St Paul

The mosaics of the fifth century survived, but required extensive reworking in their restoration. It portrays a bust of Jesus, the Apocalypse of John and is flanked by 24 Doctors of the Church and is also embellished by flying symbols of the four Evangelists. The large chandelier from the twelfth-century survived as did some mosaics of the thirteenth century. The marble tombstone under which the remains of St Paul lie is also the original one. The triumphal arch portrays St Peter and St Paul on either side, with the image of St Paul pointing downwards, probably to his tomb. 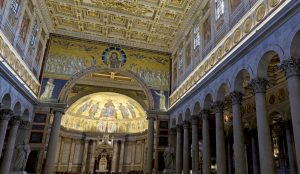 The Basilica’s walls are adorned with portraits of each of the Popes, with the portrait of Pope Francis the current pontiff, positioned in such that it is lit up by a beam of sunlight. The atrium is located in the exterior which again is supported by 150 columns. The facade of the Basilica is enhanced by a golden mosaic of gigantic proportions that was constructed between 1854 and 1874, and is based on the designs of Agricola and Consoni. A huge statue of St Paul, sculpted by Giuseppe Obici, stands right at the centre of atrium, and dominates the imposing quadricportico which is 70 meters long. 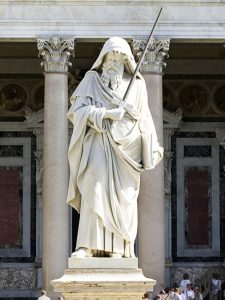 The statue of St Paul by Giuseppe Obici

Some of the relics on display date back to the time of St Paul, one of which is the chain which was attached to the Apostle and the Roman soldier assigned to guard him. A mention of this relic was made by Pope Leo the Great in the fifth century. 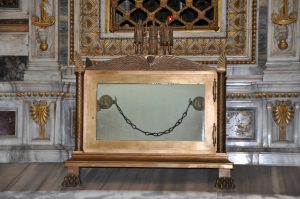 An Art Gallery where some of the most valuable paintings from the Old Basilica are displayed; is located in the Sacristy and in two rooms which are adjacent. A painting of the Virgin Mary with the Infant Christ dating from the 15th century by Antoniazzo Romano is one of works of art. In addition to forty works, painted between the 13th to 19th century housed in the gallery; a Carolingian Bible manuscript from the 8th century is also preserved in the library of the Abbey.

The Art Gallery and Museum

There is no doubt that the Basilica of St Paul Outside the Walls is one of the high points of Catholic Art. Although located roughly 7 kms away from St Peter’s Basilica, it is well worth the trip which does have the typical hassles that city traffic brings. You can admire masterpieces that date from many different centuries, created by a galaxy of the finest artists of different eras, in a single location. This is a Basilica that underlines the majesty of the church founded by Jesus and is one of the finest monuments ever raised in His Glory.

[…] new level. With our interdisciplinary backgrounds, Rome brought our head knowledge of theology, sacred art and architecture and Church history to life. This isn’t like our past experiences of visiting Rome on quick […]