The Holy Land: The Franciscan Way

Pilgrim Stays was privileged to host two leading authorities on the Holy Land at our second Facebook Live event on 4th July 2020. Leading the webinar was Fr Praveen D’souza, OFM, Provincial of the Franciscans at Bangalore and Fr Francis Xavier OFM, who is the first Commissary of the Holy Land in India. Fr Praveen’s connection with the Holy Land goes back to the days of his priestly studies, when he spent four years studying Sacred Scripture in Israel. Both Fr Praveen and Fr Francis are officially licensed guides to conduct Franciscan Holy Land Tours.

The Franciscan tryst with the Holy Land can be traced to 1217 AD, when Saint Francis of Assisi founded the Order of Friars Minor in Jerusalem subordinate to the parent organisation Order of Friars Minor, headquartered at Porziuncola, Assisi. The friars are tasked with the Custody of the Holy Land. Specifically they are to ‘guard the grace of the Holy places of the Holy Land and the rest of the Middle East, as well as the pilgrims visiting the Holy places’ on behalf of the Catholic Church. This arrangement was formalised by virtue of two Papal Bulls, Gratiam agimus and Nuper charissimae issued by Pope Clement VI, in 1342 AD. 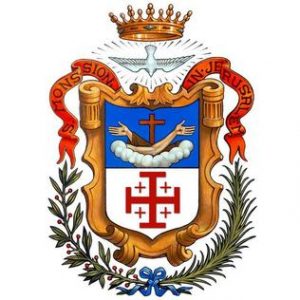 Coast of Arms of the Custodian of the Holy Land

Since the fall of the First Crusader Kingdom of Jerusalem in 1187 to Saladin the Sultan of Egypt and Syria, Jerusalem had been in Muslim hands. The Franciscans had already settled in Jerusalem in 1229, when they had a small house located near the fifth station of the Cross on the Via Dolorosa. In 1272 AD, Sultan Baibars of Egypt permitted the Franciscans to settle in the Cenacle on Mount. The Franciscans moved into Bethlehem in 1309 and into the church of the Holy Sepulchre, along with the Canons Regular. 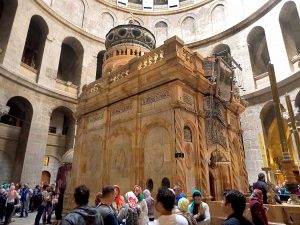 The church of the Holy Sepulchre, where the tomb of Jesus is located

The Cenacle on Mount Sion, was purchased in 1333 AD by King Robert d’Anjou of Naples, and his wife Sancia of Majorca, and handed over to the Franciscans. 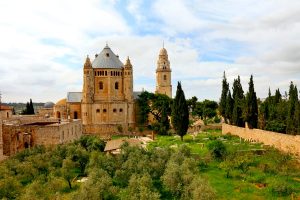 According to Christian tradition, the Cenacle or the Upper Room was where the Last Supper took place and it was here that the Holy Spirit descended upon the remaining eleven Apostles on the day of the Pentecost. It is thought to be the place where the Apostles were lodged while in Jerusalem. 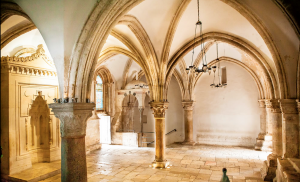 The Cenacle where the Last Supper of Jesus took place

During the Roman period the Emperor Theodosius I, constructed the five-aisled Hagia Sion or Holy Zion Basilica probably between 379 and 381 AD. The Franciscans who had been gifted the Cenacle, took great care of it and restored the basilica with Gothic styled vaults. In 1552, the friars were evicted from the Cenacle by the Ottoman Turks, who had now captured Jerusalem. Christians were banished and the Cenacle was converted into a mosque. It was not until 1948 that Christians were allowed to worship here with the establishment of the State of Israel.

Logo for the 800th Anniversary 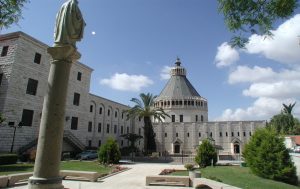 The Basilica at Nazareth where the Annunciation was made to Mary

There are several Franciscan establishments in Israel, prominent among them being the Terra Sancta Museum in Jerusalem. It is a showcase of numerous artifacts from the time of Jesus, some of which are priceless treasures. 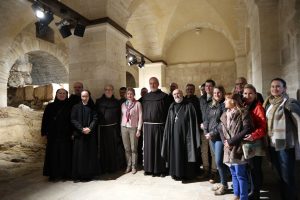 At the Terra Sancta Museum in Jerusalem

The properties owned by the Franciscan order in the Holy Land are vast, and are second in acreage only to the Orthodox Church of Jerusalem, which belongs to Eastern Catholicism. As Custodians, the Franciscans are in charge of 74 shrines and sanctuaries throughout the Holy Land, including properties in Syria and Jordan. The principal office of the Custodian functions from the Monastery of St Saviour in the Old City of Jerusalem, appropriately enough at an address named after the founder: No 1, St Francis Street. 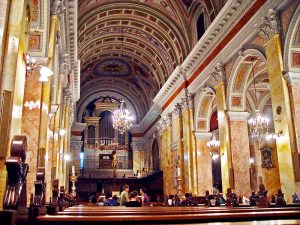 Visiting the Holy Land under the care and guidance of the Franciscans, will give the pilgrim from India an experience that cannot be matched by any commercial tour. With the Friars you get to see dozens of shrines that remain out of bounds on most tours, either due to paucity of time or a lack of interest in their groups. It is for this very reason, that Pilgrim Stays has partnered with this illustrious organisation to bring Franciscan Holy Land Tours of this scope to benefit all pilgrims who intend to visit the places that our Lord walked on. 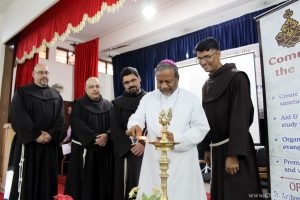 The Commissariat of the Holy Land launched by the Archbishop of Bangalore, Rt Rev Dr Peter Machado

On 25 January 2020, the Commissariat of the Holy Land in India was inaugurated at St Anthony’s Friary, Bangalore to promote Franciscan Holy Land Tours. About three weeks later, Pilgrim Stays was formally launched at the Catholic Bishops’ Conference of India on 16 February 2020, also at Bangalore. Pilgrim Stays has taken the initiative to bring the unparalleled Franciscan connection to the Holy Land to benefit the Christian community, so that they can fruitfully gain from their knowledge, experience and above all access to all the places in the land where Jesus lived.

Christianity in Kerala: A Historical Perspective » Pilgrim Stays
Log in to Reply

[…] You can check the first one on the Vatican here. This was followed by the second webinar on the Holy Land and more recently on Goa. As usual the audience was held spellbound by the depth of knowledge of […]