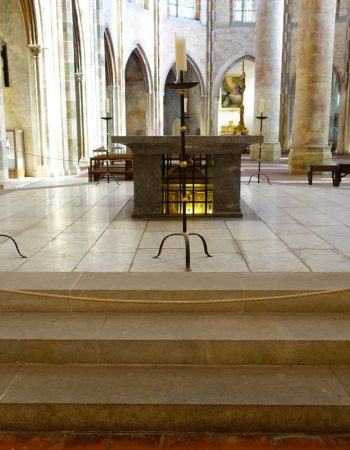 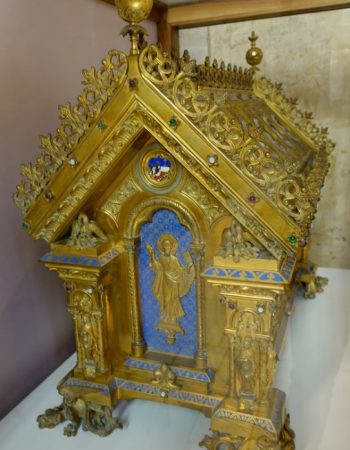 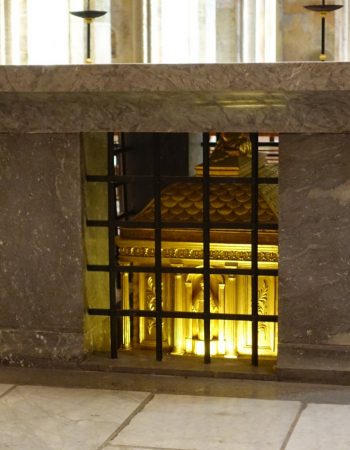 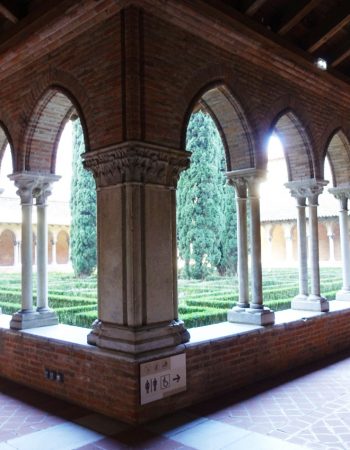 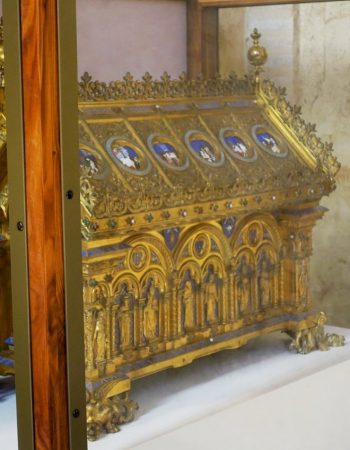 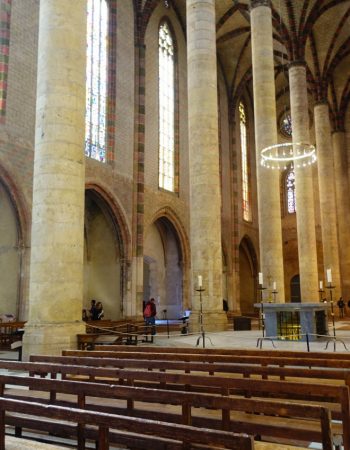 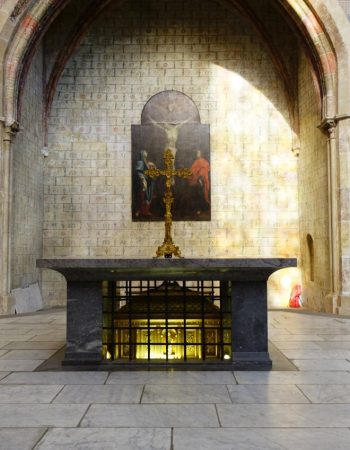 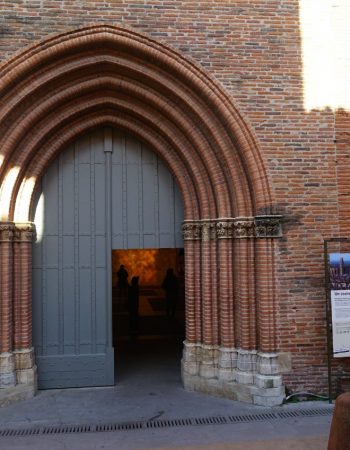 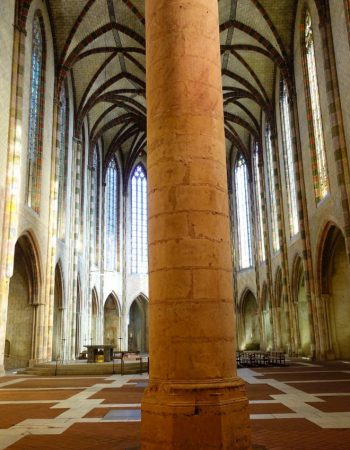 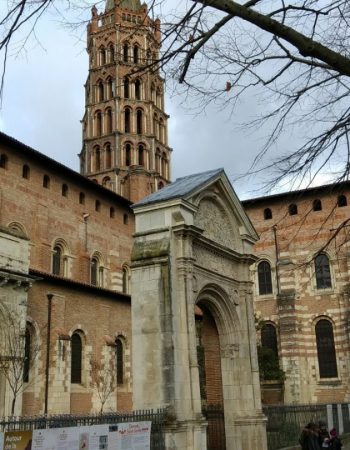 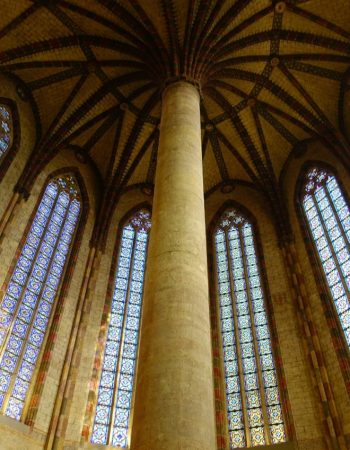 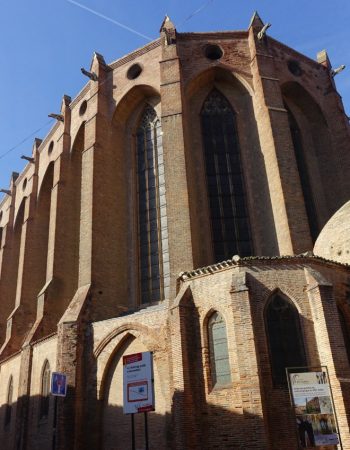 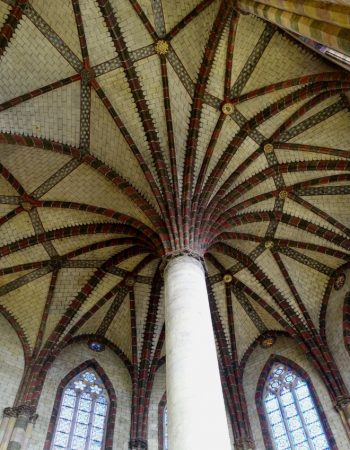 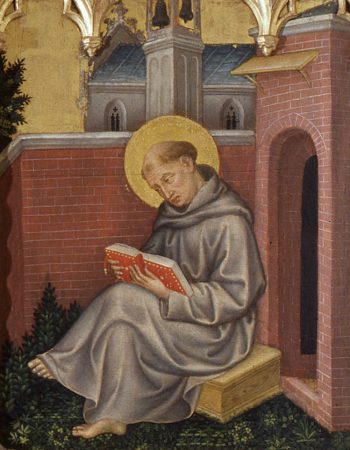 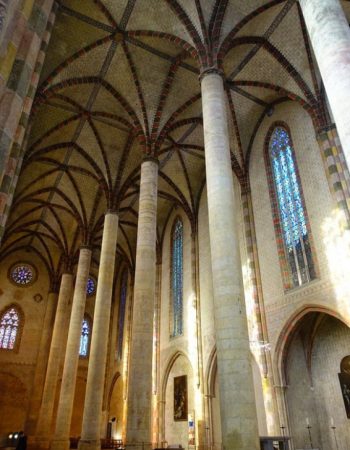 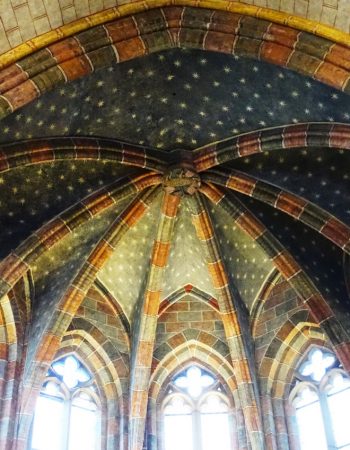 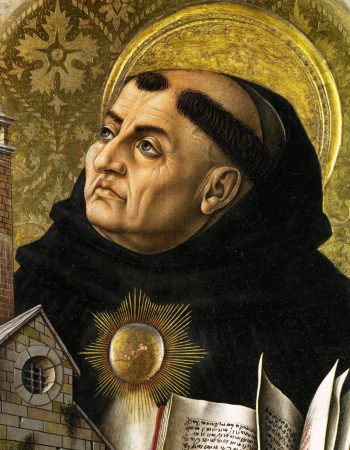 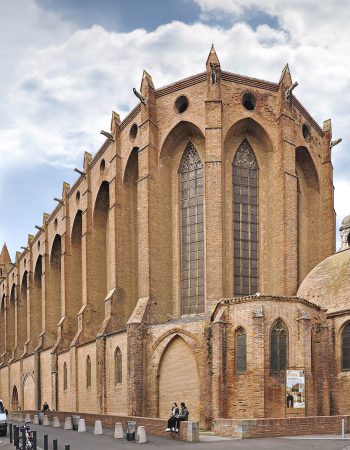 The Relics of St Thomas Aquinas at the Church of the Jacobins, Toulouse, France

Standing majestically in the heart of Toulouse, France, is a huge Gothic structure of brick and stone. The main claim to fame of this building known as the Church of the Jacobins is the tomb of St Thomas Aquinas, whose remains are entombed in a golden reliquary beside the altar. One of its striking features are the huge palm tree columns that support the main nave’s ceiling. These are complemented by impressive stained-glass windows that tower alongside.

Dating back to 1230, the Church of the Jacobins traces its origins to a small community of monastic preachers originally founded by St Dominic at Toulouse. It has weathered many storms in its complicated history that spans almost eight centuries. A series of historical twists and turns starting from the French Revolution led to the eventual de-consecration of the church. Although the church is no longer in active use, a part of it has been converted into a museum.

A landmark event in its history was the takeover by Napoleon who used it as an armoury, besides having the walls whitewashed to cover its beautiful medieval frescoes. Appalled at the destruction, outraged citizens of Toulouse managed to convince the army to move to other barracks. A series of restorations conducted over the last 150 years have seen this beautiful structure regain much of its former glory. Today it stands in quiet solitude, having borne witness to tumultuous events like the banishment of its Dominican founders in the wake of the French Revolution, the takeover by Napoleon and the destruction brought about by two world wars.

But who exactly is Thomas Aquinas and what is it about him that lends such great significance to the Church of the Jacobins?

A Doctor of the Church and arguably its most influential theologian, St Thomas Aquinas was a Dominican Friar whose works have had a far reaching and profound impact on Western thought. Ranked alongside the four great Latin fathers of the Church- St Ambrose, St Augustine of Hippo, St Jerome of Stridon and the Pope St Gregory the Great- St Thomas Aquinas has been described as “one of the dozen greatest philosophers of the western world”.

St Thomas was born in 1225 to an aristocratic Italian family. His father Landulf of Aquino was a man of means and power and served as a knight under the Holy Roman Emperor Frederick II. Being the nephew of Sinibald, Abbot of the Monte Cassino Benedictine monastery, it was expected of Thomas to follow his uncle into the order.

Thomas showed great scholarly promise at a tender age and was enrolled by his father first at Cassino and later at the recently established studium generale (Medieval University) at Naples. It is here that Thomas was introduced to the thought of Aristotle and to the Dominican Order which had been established a few years earlier in 1215. The former was to exercise great influence on his thinking and the books he authored, while the latter shaped the nature of his calling into religious life.

The decision of Thomas to join the Dominican Order was not looked upon kindly by his family. They attempted to dissuade him by means of abduction and then confinement in the family castle for nearly a year. The undeterred Thomas was firm in his resolve and eventually the family accepted the path that he had chosen for himself. Thomas was sent to Paris to enrol in University of Paris where he learnt the Arts. It was here Thomas came into contact with Albertus Magnus, a Dominican scholar who mentored him.

Quiet by nature and reticent in speech, Thomas invited ridicule from his fellow students who thought him to be slow. It was Albertus who pronounced with great insight, “You call him the dumb ox, but in his teaching he will one day produce such a bellowing that it will be heard throughout the world”.

St Thomas Aquinas was to resoundingly prove this prophecy correct as he went on to master his subjects and author great works on theology and philosophy, which to this day remain the cornerstone of the teachings of the Roman Catholic Church. St Thomas was the first theologian to marry the philosophy of Aristotle to the principles of Christianity. He held that reason was to be found to be in God and that the existence of God was not contrary to logic and science.

The rise of Thomism and the Theology of St Thomas Aquinas

Notable among his works is the Summa Theologica which is the most referred work of Theology in not just the Roman Catholic Church, but also in the Eastern Catholic Churches as well as in mainstream Protestant denominations. It is however an unfinished work as St Thomas Aquinas abandoned writing of the third part, soon after two mystical experiences that he is traditionally held to have experienced. He is said to have cryptically remarked to his secretary and fellow Dominican, Reginald of Piperno thus “Mihi videtur ut palea” or “All that I have written seems like straw compared to what has now been revealed to me”.

St Thomas died on 7 March 1274, weeks before he was to present his work at the Second Council of Lyon to which he had been summoned by Pope Gregory X. In 1567, St Thomas Aquinas was proclaimed a Doctor of the Church by Pope Pius V. In the encyclical Aeterni Patris, issued by Pope Leo XIII on 4th August 1879, the theology of Thomas Aquinas was accorded central place in the doctrine of the Church. The following year he was declared patron of all Catholic educational establishments.

Toulouse is one of the most important cities of France and has an international airport. Conveniently connected by train to major French cities, it is 133 kms away from Lourdes and is a popular stop for pilgrims en route to this important Catholic destination in France.