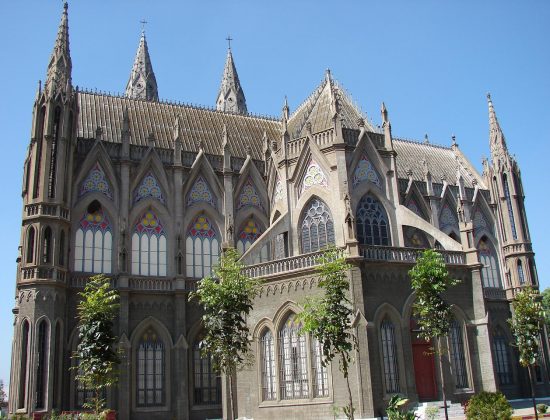 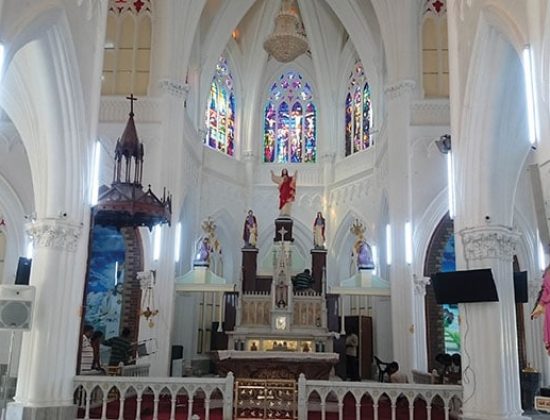 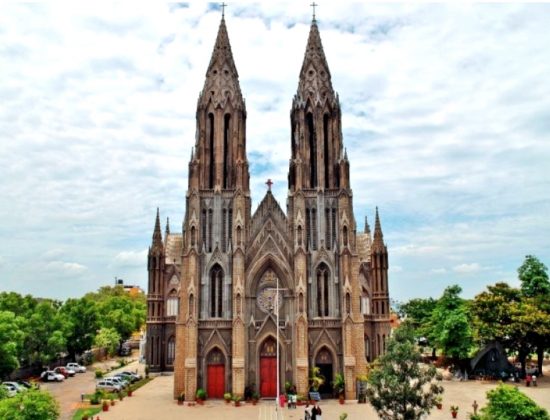 The history of St Philomena’s Cathedral, Mysore can be traced back to the defeat in May 1799, of Tippu Sultan at the hands of the British. Following this event, power was restored to the Wodeyars, and the capital of the kingdom moved to Mysore from Srirangapatnam. As a result, many officers and men of the British Army settled down at Mysore and soon the numbers of Christians were growing. Realising the need for a church for his Christian subjects, the Maharaja Krishnaraja Wodeyar III granted them a small plot of land on the Mysore-Bangalore road for this purpose.

An inscription on the church that came up here read: “In the name of that only God- the universal Lord who creates, protects, and reigns over the universe of Light, the mundane world and the assemblage of all created lives – this church is built 1843 years after the incarnation of Jesus Christ, the Enlightenment of the World, as man”. This church was constructed by the Maharaja Krishnaraja Wodeyar III and completed in 1843. It was to be the predecessor of the iconic Mysore landmark, St Philomena’s Cathedral.

It should come as no surprise that one of the largest and most impressive churches in the country should have been erected at Mysore. For it was this kingdom, which was considered the most progressive and modern of the princely states of India. The cathedral has twin spires towering to a height of 175 feet each, and draws inspiration from the Cologne Cathedral of Germany and St Patrick’s Cathedral in New York.

St Philomena, to whom the cathedral is dedicated, was a young Greek princess who was martyred in the 4th century at Rome. It is said she was tortured and beheaded by the Emperor Diocletion, when she refused to marry him and vowed to give herself to God.

In 1926, a relic of the Saint was obtained by Sir T Thumboo Chetty, who was the Huzur Secretary to the Maharaja of Mysore, from Peter Pisani, Apostolic Delegate of the East Indies. The relic was handed over to Fr Cochet, who approached the Maharaja Krishnaraja Wodeyar IV, for assistance in raising a new church in honour of St Philomena. The foundation stone of the church was laid on 28 October 1933 by the Maharaja during he said “The new church will be strongly and securely built upon a double foundation- divine compassion and the eager gratitude of men”.

It is to the credit of the rulers of Mysore who were enlightened in their approach to their subjects and thus brought everlasting glory to themselves for their tolerance. The relic of the Saint is preserved in a crypt beneath the main altar. St Philomena’s Cathedral, Mysore was further immortalised, when the cult 1977 Bollywood classic ‘Amar Akbar Anthony’ was shot on location there.