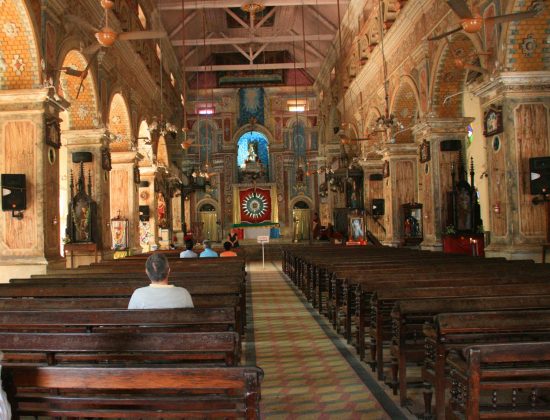 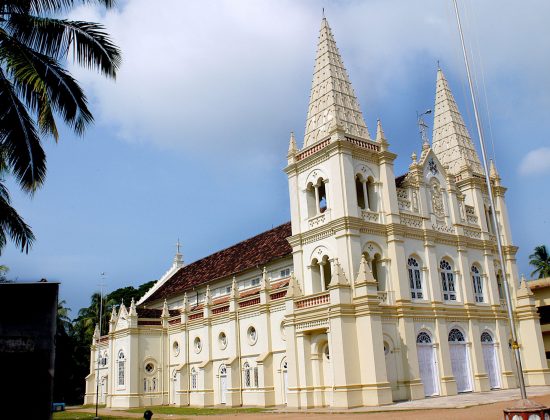 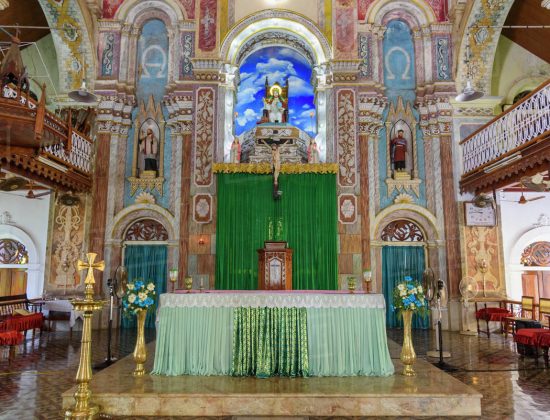 The magnificent Santa Cruz Cathedral Basilica at Fort Kochi has a history dating back to 1505. It begins with the first contingent of eight Franciscan friars, who set sail from Lisbon aboard the fleet of Pedro Alvarez Cabral on the 9th of March, 1500. Landing at Calicut, three of the priests were tragically slain in the massacre of 16th November, 1500. Calicut was at that time under the sway of the Zamorin, who had no love lost for the Portuguese.

The survivors arrived at Cochin by the end of November, where they were warmly received by its ruler, Trimumpara Raja or the King Unni Goda Varma. Angered by the reception accorded to his arch enemies, the Portuguese, the Zamorin attacked the Kingdom of Cochin. It was the Portuguese fleet commanded by the legendary Afonso de Albuquerque, which came to the aid of the beleagured Trimumpara Raja. The superior fire power of the Portuguese cannons prevailed and Cochin was saved from certain defeat. As a gesture, its grateful ruler accorded the Portuguese permission to build a Fort at Kochi.

Strange as it may sound today, limestone and mortar was not to be used in any construction save a royal palace or a temple. The first Portuguese Viceroy Dom Francisco de Almeida, succeeded in obtaining permission from the Raja to use these sturdy materials in constructing the original Santa Cruz church. As the foundation was laid on May 3rd 1505, the feast day of the Invention of the Holy Cross, it was natural that the church be named Santa Cruz. A Relic of The Holy Cross used in the crucifixion of Jesus Christ is hosted in the Basilica.

In 1558, the church was elevated to the status of a Cathedral by Pope Paul IV. In 1663, Cochin was conquered by the Dutch whose policy was to destroy all things Catholic. Although the church was not razed to the ground, it was converted by the Dutch for use as an armoury. Over a century later in 1795, the English took control of Cochin. They demolished the cathedral which was now being used to store arms. A decorative granite pillar from the original Cathedral survives to this day, and is preserved as a monument in the Basilica.

In 1885, plans for the re-erection of the Cathedral were put in place. Construction proceeded over the next twenty years. The cathedral was consecrated on 19 November 1905. Its main altar was decorated by Fr Antonio Moscheni, the Italian Jesuit from Mangalore, who was responsible for the frescoes that adorn the St Aloysius Chapel there. Unfortunately Fr Moscheni, never lived to witness the formal consecration as he died at Cochin on 15 November 1905, a mere four days prior to the event.

The cathedral abounds in stunning murals, frescoes on its majestic columns, stained glass art of exquisite craftsmanship besides large canvas paintings of extraordinary calibre. One such painting of the Last Supper is modelled on the world famous one by Leonardo da Vinci. Twin spires complete the majestic exterior bathed in a dazzling white wash. In view of its historical importance and priceless artistic worth, Pope John Paul II on 23 August 1984, raised the Santa Cruz Cathedral to the status of Basilica.