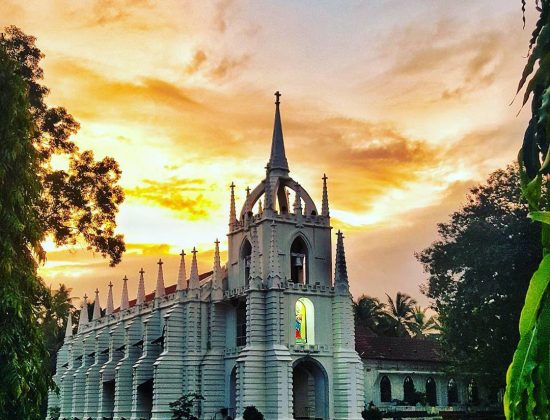 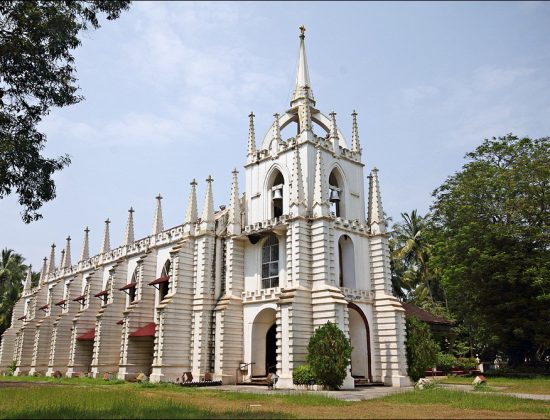 Although Goa has so many churches, each more beautiful than the next, the Mae de Deus Church at Saligao has extraordinary written all over it. With striking exteriors matched by equally if not more magnificent interiors, this is a church that will take your breath away. Set amidst picturesque surroundings of the Goan countryside, the Mae de Deus is a church where the Neo Gothic style has been experimented with to the hilt, with absolutely stunning results to show for it.

Formerly a part of the neighbouring Nagoa parish, Saligao was spun off into a separate parish with the foundation stone for the new church laid on 7th February 1867. It was built with stones said to have been sourced from three different sites. The first lot of black stones were recycled from the ruins of the Mae de Deus convent in Daujim, another batch from the nearby Chapel of Our Lady of Victory which was in a state of disrepair. The rest were procured from a nearby quarry.

With its signature buttresses, supporting the outer walls and capped with a series of tapering spires towering all around the main structure, the Mae de Deus Church stands out in the lush green landscape, for its sheer breathtaking beauty. The church was blessed and consecrated on November 26 1873. Inside the church, it is the altar that will grab your attention for the opulence of its glittering reredos, meticulously carved and gilded to perfection. In addition to the main altar, there are six other altars as is typical with most Portuguese churches.

The miraculous statue of Mai de Deus, painted in gold was originally housed in the Mae de Deus convent in Daujim, Old Goa. It was transported to the church by boat and bullock cart to the accompaniment of a ceremonial band and installed in the church amidst cheers. Today it is placed prominently on one of the side altars. The statue is greatly treasured by the faithful of Saligao, as prayers for favours never go unanswered.

The church has since been declared a heritage structure. Illumination of the church is now funded by Goa Tourism. One cannot miss this church while driving past, as it majestically brightens the night sky with its tasteful and well designed illumination.