Bethlehem: The birthplace of Jesus

The Birthplace of Jesus

“It is better to see and experience something once, than to hear about it a thousand times.” — Anonymous

Bethlehem is synonymous with the birth of Jesus, a personality who changed forever the course of history, and indeed mankind itself. The inspiration drawn from his life and teachings has enriched humanity immensely. 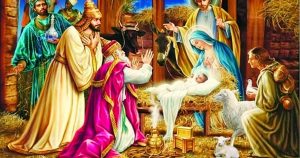 The Nativity of the Christ child

Millions have found succour in a faith that was founded on the sacrifice and resurrection of Jesus Christ. And countless more live that faith, the Christian life, which guides their actions and beliefs. 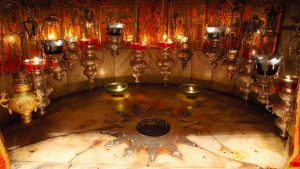 The silver star marks the exact spot where Jesus was born

That being said, nothing could replace visiting the birthplace of Jesus to experience and understand all that he did in the course of his relatively short life. For centuries a pilgrimage to the Holy Land has been the high point of Christian life. It is an opportunity to see the Bible come to life in vivid detail. All that you have read in the Bible begins to make greater sense when you actually visit the places mentioned and then begin to relate to them in a deeper sense. 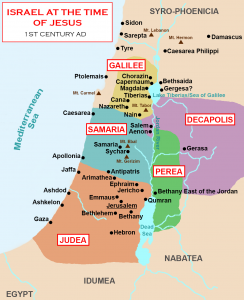 Lying 10 kms to the south of Jerusalem, the town of Bethlehem is the birthplace of Jesus. Mentioned in countless works of art, music, literature, theology, ecclesiastical tomes and the like, Bethlehem is the cradle of Christianity and the scene of the Nativity of the Saviour. The first church was built over a cave that was believed to the actual birthplace of Jesus. In the year 135 AD, Emperor Hadrian had the site demolished and converted into a place of worship for Adonis. He also had a sacred grove planted there in order to remove all traces of Jesus and his memory. 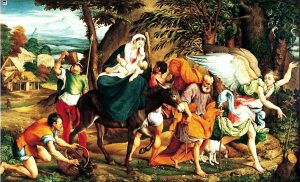 The flight into Egypt

But as with all things earthly, the will of God reigned supreme. The conversion of the Emperor Constantine and the acceptance of Christianity in the Roman Empire, by proclamation of the Edict of Milan in 313 AD, was a turning point in the early history of Christianity. All the lands of the Church which had been confiscated were duly returned. Two of the most important shrines that Emperor Constantine erected were the Church of the Nativity at Bethlehem at the birthplace of Jesus, and Old St Peter’s Basilica at Rome. St Helena, mother of the Emperor Constantine, who was a Christian of Greek origin was a great influence in bringing about this change. 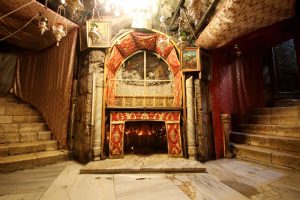 Grotto of the Nativity

The Basilica commissioned by the Emperor was in all likelihood, built between the years 330-333 and was consecrated on 31 May, 339. Following the arson of the Samaritan rebellion around 529 AD, the Basilica was completely destroyed. The Byzantine Emperor Justinian who reigned between 527-565 had it rebuilt, retaining the original character of the building, while at the same time making significant additions to it. 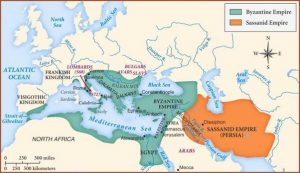 This church has miraculously survived to the present day remaining largely unchanged. In 614 AD, the Persians attacked the Byzantium Empire and destroyed many of their churches and monasteries in the Holy Land. The church of the Nativity was spared, as the Persians mistook the figures of the three kings from the East decked in oriental attire, for fellow-countrymen. When the Crusaders seized the Holy Land, they first captured Bethlehem before taking Jerusalem. In 1100 AD, Baldwin I was crowned in this Church as the ruler of the First Crusader Kingdom of Jerusalem. In later years, the Byzantine Emperor Manuel had the Church of the Nativity restored. 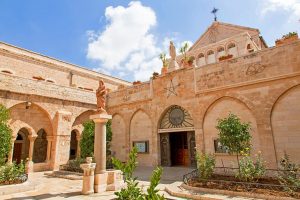 Church of the Nativity, Bethlehem

During the time the Crusaders were in control, there were many additions, such as the bell towers which however no longer exist. The area of the complex has been substantially expanded and house monasteries of the Greek Orthodox, Armenian Apostolic and Roman Catholic Churches. There has been constant squabbling between the different denominations over control over the site. An understanding between them has been in place for the last 250 years and is referred to as the Status Quo. The term Status Quo was first used in the Treaty of Berlin 1878, which is one of the formal agreements in place. 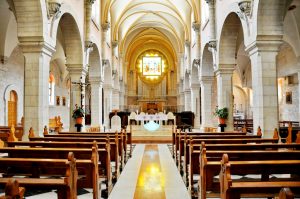 Adjacent to the Church of the Nativity is the Franciscan church of St Catherine, which was rebuilt over an earlier church in 1881. A system of caves exists beneath the church and can be accessed by a staircase near the southern aisle. A stone bench near the rear wall held the remains of St Jerome, which were later transported to Rome, where they were buried in the Major Basilica of Santa Maria Maggiore. St Jerome, a 4th century Doctor of the Church, is most famous for his translation of the Bible into Latin, which is referred to as the Latin Vulgate. 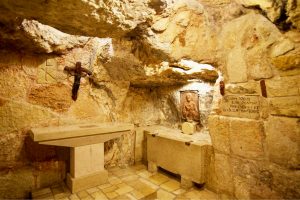 The cave of St Jerome, Bethlehem

To the left of the church of St Catherine is the Chapel of the Holy Innocents, built to commemorate the massacre of new-borns of Bethlehem by King Herod soon after the birth of Jesus. 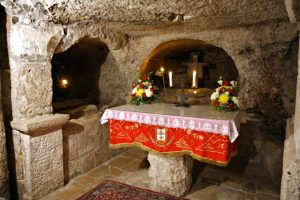 Chapel of the Holy Innocents

The Chapel of St Eusebius is to the right where the tombs of St Paula and her daughter St Eustochium exist. St Joseph’s Chapel is also located close by. 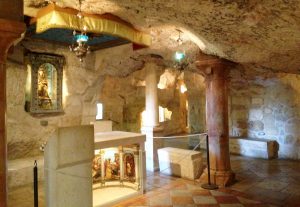 The milk grotto is an interesting chapel of Bethlehem. This is the cave where the Holy Family hid before their flight into Egypt, soon after Herod ordered the slaughter of all infant boys. Legend has it that Mary shed a drop of blood on the floor of the cave, which had the effect of whitening the stone. In course of time, a belief that a visit to the cave will induce fertility in women became widespread among the faithful. The grotto is visited by women who have trouble conceiving, in the hope that they will be blessed with children. 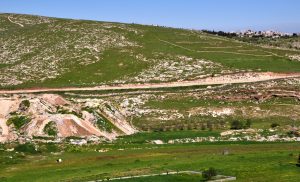 Three kms on the outskirts of Bethlehem is the Shepherd’s Field or Beit Sahour, which is widely believed to be the place where the birth of Jesus was announced by the angels. One can visit a couple of churches in this area, including a Greek Orthodox one where remains of a 4th century church were excavated in 1972. 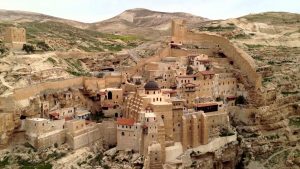 Located 18 kilometers from Bethlehem is the historic Mar Saba Greek Orthodox Monastery. Nestled in the Kidron Gorge between two near vertical rock faces, the monastery is a magnificent spectacle. It is said to have been founded by St Sabas (born in 439 AD) on the slopes of the gorge facing the cave that he lived in, in the Kidron Valley. He is said to have travelled to Constantinople, at the advanced age of 90, to persuade the Emperor Justinian to have the Church of the Nativity in Bethlehem rebuilt. His tomb became a place of pilgrimage, soon after his death in 532 AD. 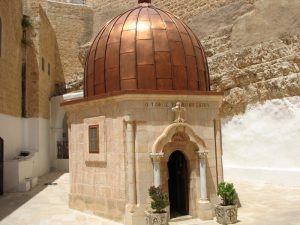 The tomb of St Sabas

The famous 8th century theologian, John of Damascus also lived in this monastery, thus adding to its fame. In what may seem an out dated practice, only men are permitted to enter the premises of the actual monastery. A tower to accommodate women is located to the right of the monastery which can be accessed by climbing a hill. The tomb of St Sabas is inside the domed church that is adorned with beautiful murals and icons. The gruesome sight of skulls of monks who died in the Persian massacre of 614 AD, are also on display.

On the road to Hebron, you can also visit Solomon’s Pools which are located five kms south-west of Bethlehem in the village of Al-Khadr. Tradition dates them back to the era of Solomon the Great, which was around the 10th century BC. These mammoth pools held sufficient water to supply the city of Jerusalem. The village also has a Greek Orthodox Church dating back to at least the thirteenth century. It is dedicated to St George who is venerated in both the Roman and Eastern Catholic churches. 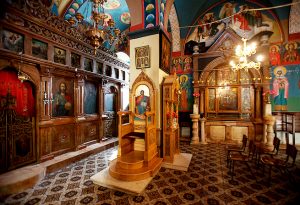 About twenty one kilometres to the south of Bethlehem is the historically important town of Hebron. The Tomb of the Patriarchs is located in Hebron where the Prophets Abraham, Isaac, and Jacob are buried. Sacred to Jews, Muslims, and Christians alike, the tomb is a massive structure whose ancient walls were built by Herod the Great. Some of the most sacred shrines in the world are located inside the complex. The Jews refer to this place as the Cave of Machpelah, while to the Muslims it is known as the Ibrahimi Mosque. 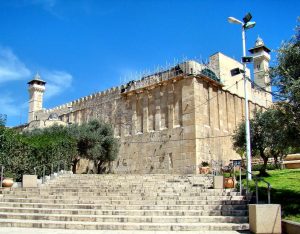 Tomb of the Patriarchs or Cave of Machpelah

The cenotaphs of Jacob and his wife Leah are to the right from the entrance. Towards the rear are the cenotaphs of Abraham and Sarah. The mosque has a prayer hall will rich carvings, dating back to the time of Saladin the Great around 1191 AD. The cenotaphs of Isaac and Rebecca are placed inside the prayer hall of the mosque. As with most religious places in the Holy Land one is expected to dress modestly and also be prepared to be subject to extremely tight security checks. 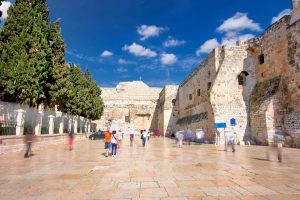 Bethlehem is mostly associated with the birth of Jesus, and has been immortalised in numerous Christmas carols and hymns. It may therefore come as a surprise to the first time visitor, to find that a modern city has sprung up in place of the quaint and rustic birthplace of Jesus, pictured in the art and literature describing Bethlehem. Today the town is part of Palestinian territory, hence visitors can expect another round of checks while entering this area. Nevertheless, a visit to the birthplace of Jesus our Lord and Saviour makes all else pale into insignificance- such is the overwhelming importance of Bethlehem to every Christian.