St Anthony of Padua: A Life in Christ

Born into a wealthy and noble Portuguese family, St Anthony’s was a life that saw many twists and turns. Like many great saints of his time, the pleasures of this world held no great attraction for him. Instead a burning desire to follow Christ and dedicate his life to the needy, saw him rise steadily up in the Catholic Church and be canonised as a Saint in less than a year from his death. 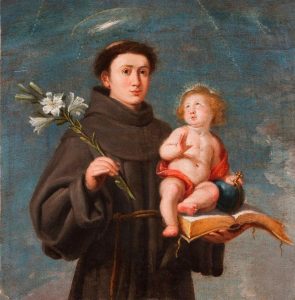 Fernando Martins de Bulhoes, the name given to him at birth, was born on 15 August 1195 at Lisbon, Portugal. The Bulhoes were wealthy members of the nobility and could afford an education for him at the cathedral school in Lisbon. 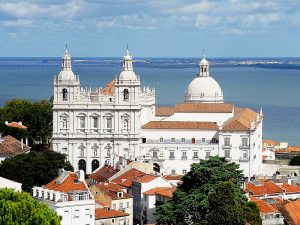 He joined the Abbey of Saint Vincent in preparation for the priesthood in the Augustinian community of Canons Regular of the Order of the Holy Cross. The Abbey was conveniently located on the outskirts of Lisbon, which made it easy for frequent visit from his family and circle of friends. 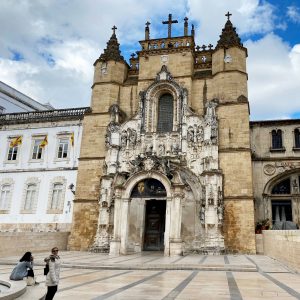 The Abbey of Santa Cruz at Coimbra

Seeking to avoid what he felt was a distraction to his purpose, young Fernando asked to be transferred to the mother-house of the congregation, at Coimbra, the capital of Portugal in ancient times. This was the Monastery of the Holy Cross or the Abbey of Santa Cruz, where he studied and excelled at theology and Latin. On ordination into the priesthood, Fernando was placed in charge of hospitality at the abbey. 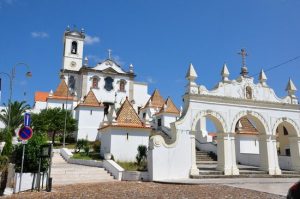 The Franciscan Monastery of St Anthony of Egypt at Olivais, Coimbra

At around the same time, a group of Franciscan friars arrived at Coimbra and set up a hermitage dedicated to St Anthony the Great who is also known as Anthony of Egypt. Their order had been founded only 11 years prior, but the simple, evangelical lifestyle of the Franciscans drew Fernando to them like an irresistible magnet. Soon news arrived that five Franciscans who had been preaching in Morocco had been beheaded. This incident was to play a crucial role in the life of Fernando and change its course in a very different direction. 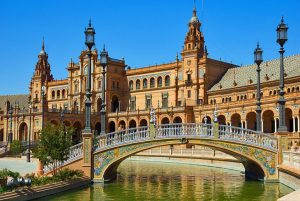 The city of Seville in Spain

The martyred Franciscan friars had been preaching at a mosque in Seville in Southern Spain. This city was under Moorish rule of the Almohad dynasty at that point of time, and remained so until 1248 when King Ferdinand III of Castile retook it. Martyrdom in Seville seemed imminent for the Friars, but the Sultan allowed them to sail to Morocco in North Africa, crossing the thin strip of the Mediterranean that separates the two continents. Morocco, harsher and unreceptive to the Franciscans, proved fatal. The friars were tortured and beheaded and the bodies were returned to Coimbra at the initiative of King Afonso II of Portugal. 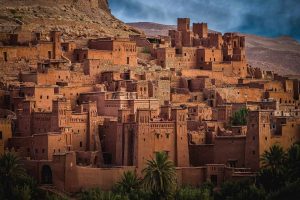 At the funeral where a huge crowd including the Queen of Portugal had gathered, the bodies were carried in solemn procession to the very monastery where Fernando lived- the Abbey of Santa Cruz. So stirred by their example was Fernando, that he applied for permission to leave the Canons Regular and join the newly founded Franciscan order. After some initial hesitation, his Augustinian superior relented and soon Fernando was admitted to the hermitage of Olivais where he became part of the Franciscan community. An event, which many viewed as an unfortunate tragedy, was to Fernando an inspiration and a call to emulate the Franciscan martyrs. 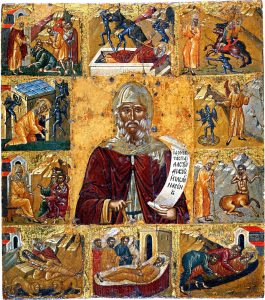 Upon entering the new Order, Fernando adopted the name Anthony from the name of the Saint to whom the chapel at Olivais was dedicated. He had made his feelings clear to the Franciscans even before entering the hermitage thus: ‘I would gladly don the habit of your order if you would promise to send me as soon as possible to the land of the Saracens (the term Europeans in the Middle Ages used, to refer to Arab Muslims), that I may gain the crown of the Holy Martyrs’. True to their promise the Franciscans at Coimbra allowed him to proceed to Morocco before long. 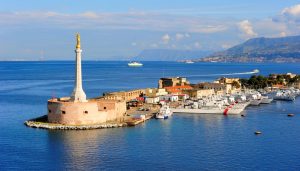 The port of Messina in Sicily

Anthony, as he was now known, began preaching at Morocco but yet again events unforeseen reshaped his destiny. Just a few months into his mission, Anthony became seriously ill to the point where he realised that he had to pack up and turn homewards to Portugal. As God would will it, his ship ran into a severe storm and the unrelenting wind blew it eastwards towards Italy. Making landfall on the eastern coast of Sicily, Anthony was taken in by friars at the nearby city of Messina, who despite not knowing the ailing friar cared for and nursed him back to health. 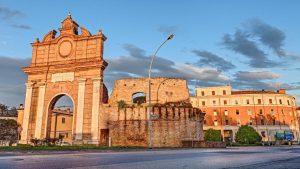 The city of Forlì in Italy’s northern Emilia-Romagna region

On regaining his health, Anthony travelled to Tuscany in central Italy and joined a convent of the Order to which he had been assigned. On account of his poor health he was then asked to join the rural hermitage of San Paolo near Forli, in Italy’s northern Emilia-Romagna region. He spent his time in solitary prayer and study in a cell that one of the friars had made in a cave close to the hermitage. 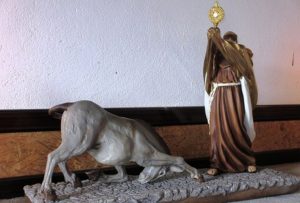 St Anthony and the Miracle of the mule

Anthony’s knowledge of the scriptures and his gift for preaching had remained hidden so far, as he had not confided the fact of his previous theological training to his Franciscan superiors. Obvious talent does not remain for hidden for long and it was no different in the case of Anthony. At a gathering held after the ordination of Dominicans and Franciscans in 1222, the provincial asked for a short sermon from amongst those gathered. Since there were no volunteers given the short notice, it fell to Anthony to deliver it. After some initial resistance, Anthony was to deliver a sermon so remarkable that it astonished the gathering to observe such a keen understanding of the scriptures in one so young. 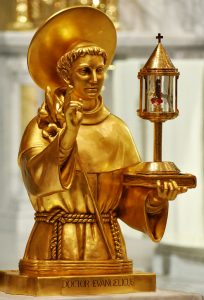 A relic of St Anthony of Padua

Soon word of his skills as a preacher reached the ears of St Francis of Assisi, the founder of the Order and 13 years his senior. He was reassigned to preach in northern Italy by St Francis, his quiet life of penance and prayer at the hermitage now exchanged for that of a preacher. Anthony chose to preach in areas where heretics were strong, yet his tone was never one of confrontation but instead, reconciliation. 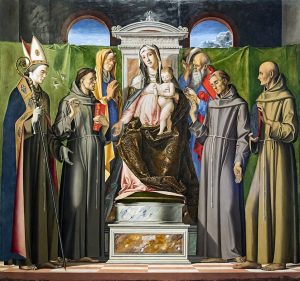 He is said to have travelled extensively in northern Italy and Southern France, and by 1226 was appointed provincial of northern Italy. Assuming greater responsibility, Anthony still found time to preach and also for contemplative prayer despite his many commitments. 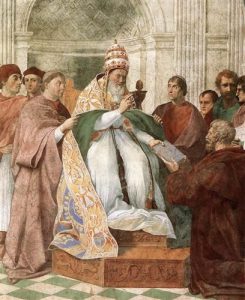 By now he had increased so much in stature that St Francis took Anthony with him to meet Pope Gregory IX around Easter in 1228. On being asked to deliver a sermon, Anthony spoke with the utmost humility to so move Pope Gregory to describe him as the ‘Ark of the Testament’ or Doctor Arca testamenti. The Pope also commissioned Anthony to produce a collection of his sermons known as Sermons for Feast Days (Sermones in Festivitates). 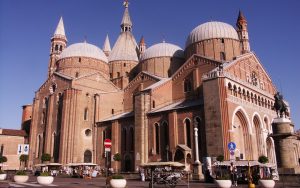 Pontifical Basilica of Saint Anthony of Padua at Padua in Italy

His life of relentless travel and preaching soon took a toll on Anthony and he fell ill, afflicted with ergotism, an illness caused by long term ingestion of a fungus that contaminates rye and other cereals. Anthony died on his return to Padua on 13 June 1231 at the Poor Clare monastery at Arcella, aged 35. In a life that was cut so cruelly short, Anthony influence had spread far beyond his immediate circle. Thousands attended his burial and his tomb became a place of extraordinary devotion and numerous miracles. 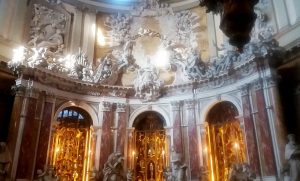 The interior of the Basilica

Less than a year from his death, he was canonised a Saint on 30 May 1232 by Pope Gregory IX at Spoleto in Italy. In 1946, St Anthony was declared a Doctor of the Church by Pope Pius XII. The help of St Anthony of Padua is invoked by devotees for recovery of items lost or stolen to this day. The reason for this lies in an incident that occurred in the life of St Anthony during the period he was teaching students in the Franciscan order. 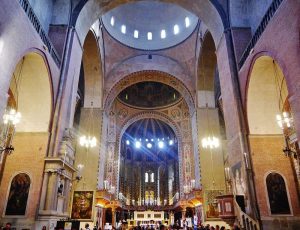 The story goes that a favourite book of Psalms which had his personal notations was stolen by a novice who was leaving the community. This was in the era before printing had been invented, which greatly increases the value of such a possession. St Anthony of Padua prayed for return of his beloved book of Psalms. In answer to his prayers, the novice returned the book to St Anthony and begged for his forgiveness, which he granted without second thought, and was also taken back to the Order. The original book that was stolen is said to be preserved in the Franciscan Friary at Bologna. 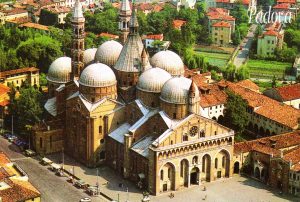 The day of his death 13 June is observed as the Feast Day of St Anthony of Padua by millions of devotees both Catholics and those from other faiths, in several parts of the world. A Novena is conducted on the first thirteen days of June as a run up to his Feast Day. In addition Novenas are also conducted on every Tuesday around the year, as this was the day St Anthony was buried. St Anthony of Padua remains one of the most popular and revered saints in the Catholic Church. His steadfast courage as he faced the many challenges in his life, and his complete surrender to the will of God, have greatly inspired his devotees to negotiate the turns and twists in their own lives, and look to St Anthony for succour.

Our Lady of Fatima Portugal: Christian Pilgrimage » Pilgrim Stays
Log in to Reply

[…] can also visit Coimbra the ancient capital of Portugal which is 85 kms from Fatima, but in the other direction which is […]