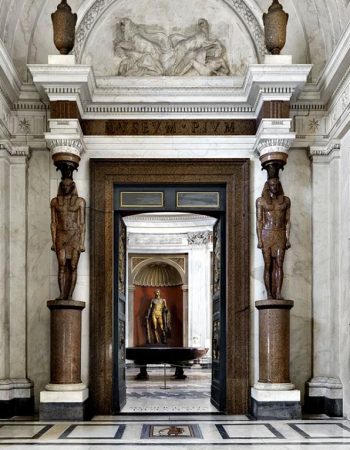 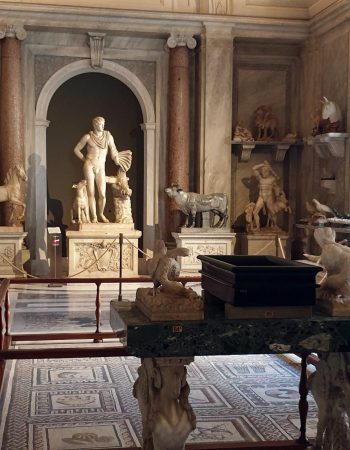 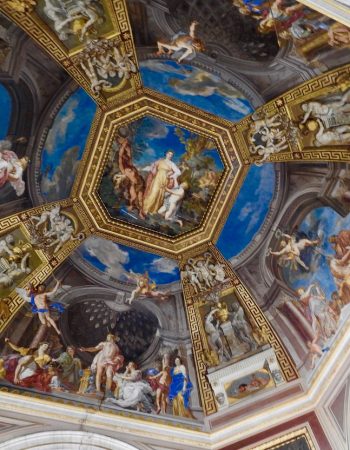 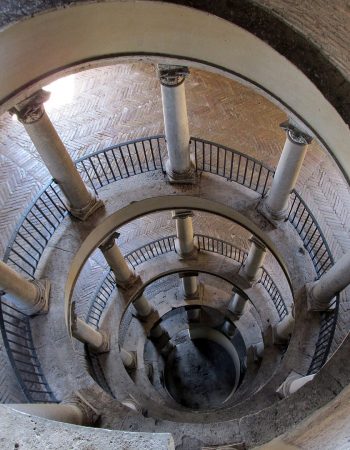 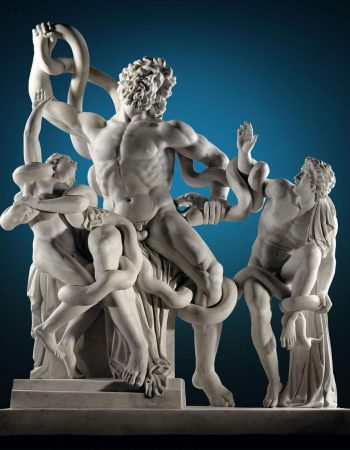 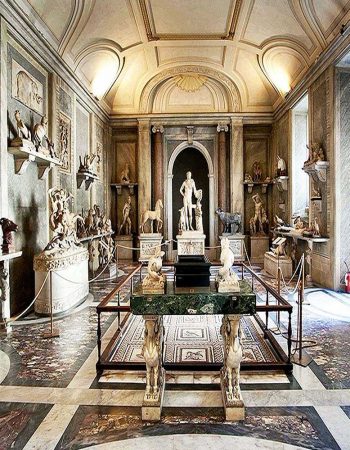 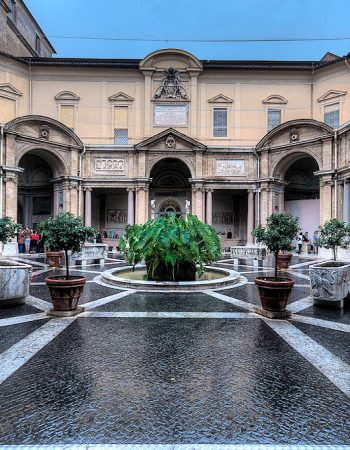 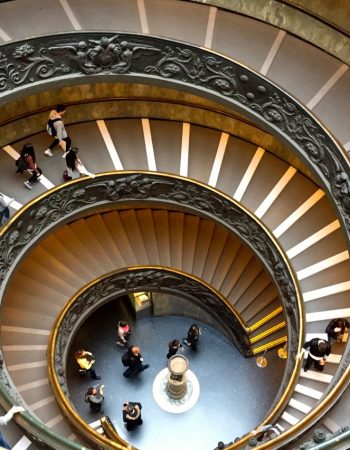 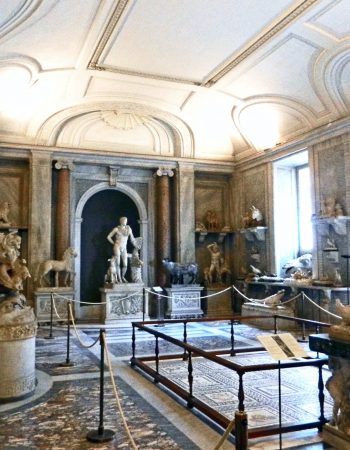 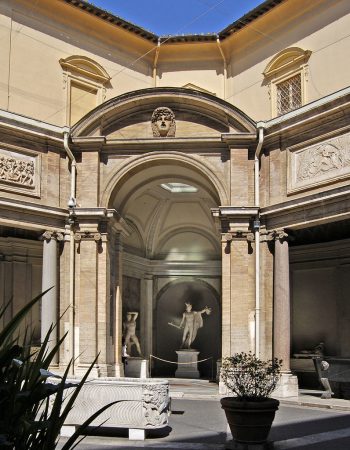 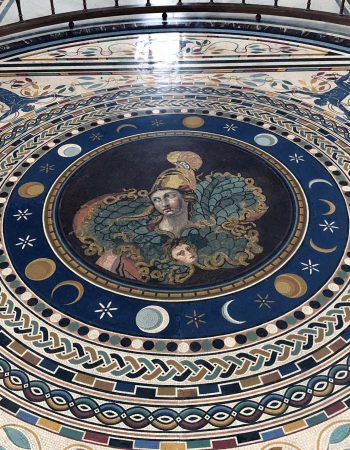 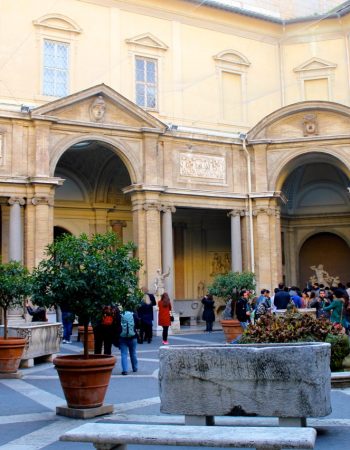 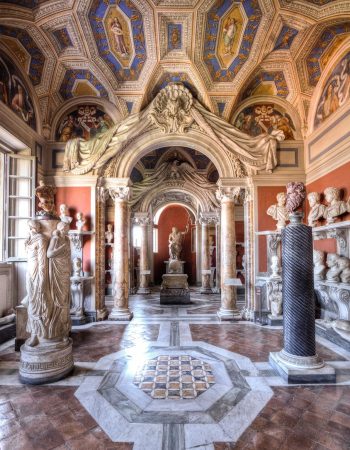 Pio Clementino Museum- a part of the Vatican Museums

Taking its name from the two popes who were instrumental in its creation, the Pio Clementino museum is an extensive collection of sculptures dating from the classical Greek and Roman eras. Pio Clementino had its beginnings when, in 1771, Pope Clement XIV decided to refurbish the Belvedere Palace. This palace dated back to the papacy of Pope Innocent VIII, in office from 1484 to 1492. The refurbishment was to house the growing pontifical collection of art, to premises spacious enough to accommodate them.

The Vatican Museums can trace their origins to the first sculpture acquired by Pope Julius II. Word was sent to the pope on 14 January 1506 of a marble work of art, possibly from Greek times, unearthed at a vineyard near the Basilica of Santa Maria Maggiore in Rome. Pope Julius sent his architect Giuliano da Sangallo and the legendary sculptor Michelangelo Buonarroti, who were engaged in rebuilding the Vatican, to examine the artefact. The duo immediately recognised the sculpture for the priceless masterpiece it was.

On their recommendation, Pope Julius II purchased the sculpture from the vineyard owner and put it on display at the Vatican shortly. The acquisition of this sculpture was to begin a collection that later became one of the largest in the world. The piece, of course, is a world-famous sculpture from Greek mythology. It depicts Laocoon, the priest of Troy, and his sons fighting off deadly serpents sent by the Gods. Befittingly, it adorns the Pio Clementino Museum.

Comprised of twelve distinct rooms or galleries, the Pio Clementino showcases priceless works of art, categorised thematically. Some of the famous rooms are the Gallery of the Statues, Gallery of the Busts, Cabinet of Masks and the Greek Cross Gallery. The Sala Rotonda or the Round Room has the likeness of a Roman Pantheon. Its floor is covered with ancient mosaics, while statues of remarkable craftsmanship adorn the perimeter.

The Sala degli Animali or the Animal Room is a hit with children, as the room has many statues of animals. The Sala delle Muse boasts of a collection of outstanding sculptures from ancient Greek and Roman times. Prominent among the attractions are the statues of Apollo and the Nine Muses. The mutilated Belvedere Torso, a sculpture with its limbs and face missing, is the central attraction. Signed on its base with the inscription ‘Apollonios, son of Nestor, Athenian’- the work likely belongs to classical antiquity. The statue is said to have been admired by Renaissance greats Michelangelo and Raphael, besides later Baroque and Mannerist artists.

Pope Julius II had, as the legend goes, asked Michelangelo to restore the statue. The master had respectfully turned down the commission as he did not wish to alter a work that he considered impossibly beautiful. Instead, the near-perfect dimensions of the torso inspired the lines for several of the characters painted in the Sistine Chapel. The depiction of the Risen Christ and St Bartholomew in the immortal painting, The Last Judgement- is inspired by this sculpture.

The other pope in the museum’s name is Pope Pius VI. Succeeding Clement XIV, he assumed the papacy in 1775. It was Pope Pius VI who enlarged the Pio Clementino and completed it. So influential was the architectural design of the Pio Clementino Museum- it remained the benchmark for numerous European constructions over the next fifty years. The structure forms part of the famous Octagonal Courtyard, originally known as the Belvedere Courtyard, and is a nucleus of the Vatican Museums.

No description of the Pio Clementino is complete without reference to its two spiral Bramante staircases. The staircases are marvels of architectural innovation and designed for the movement of people, unhindered. The first one, completed in 1505, is named after its designer Donato Bramante. The staircase connects the Belvedere palace to the exterior. A double helix design rests on giant Doric columns of granite. A double helix is two staircases that enable traffic to move in both directions without meeting.

The second staircase built in 1932 and designed by Giuseppe Momo is also called the second Bramante staircase. Like the original, it is also has a double helix with two staircases and ornately crafted metal railings. The canopy built above it allows adequate daylight to illuminate the pathway. The second staircase forms part of the museum exit and is the route by which visitors leave.

The Pio Clementino Museum is excellently curated and attracts millions of visitors each year. Taken in conjunction with the other Vatican Museums, it can be both soul-satisfying and also overwhelming. It has the appeal that even the most widely travelled will find stimulating. The Pio Clementino is, without doubt, to be experienced at least once a lifetime.