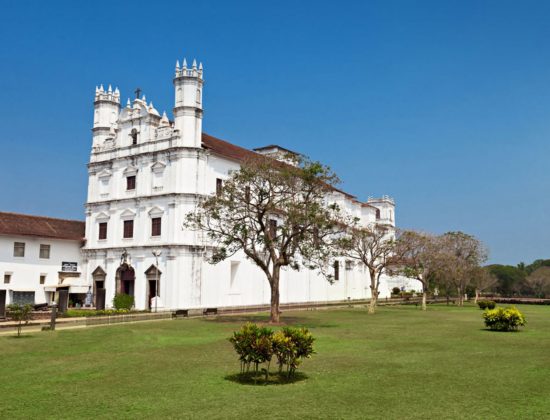 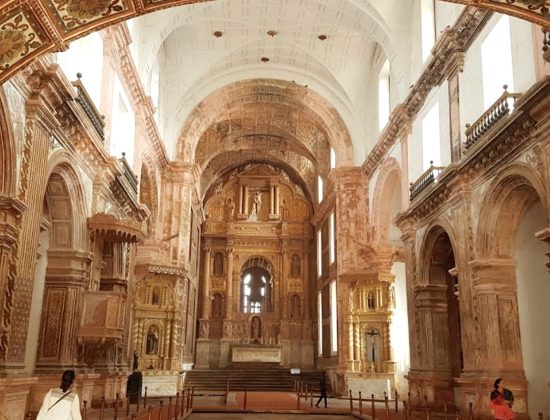 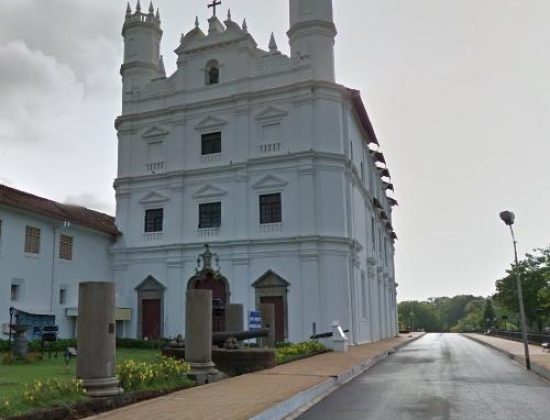 Soon after the Portuguese conquest of Goa in 1510, many religious orders from Europe made their way to India to carry out the Evangelisation of the East. The year 1517 saw the first batch of eight Franciscan friars arriving in Goa. By 1521, the Franciscans had built a small chapel dedicated to the Holy Ghost, which was the predecessor to the Church of St Francis of Assisi, Goa.

Later years saw the chapel being expanded, and by 1602 it was consecrated as a church. In due course, that church gave way to the present edifice which was erected in 1661, and dedicated to the founder of the Franciscan Order, St Francis of Assisi.

The new church displays mixed architectural elements in its three tiered exterior. While the outer facade is relatively simple, employing the Tuscan style of architecture, the portal of the old structure cast in the Portuguese Manueline style, has been retained. Impressively flanking the facade on either side are twin octagonal towers of majestic appearance. Housed in a small niche at the entrance is a statue of Our Lady of Miracles which was brought from Jaffna in Sri Lanka.

It is the interior of the church however, that brings to life the richness of European art of that period. The main altar is a lavish and extravagant affair, which displays craftsmanship of the highest order. The style is mostly Baroque with Corinthian elements woven into it. A tabernacle supported by the four Evangelists Matthew, Mark, Luke and John occupies centre stage. Placed prominently above it are two large statues one of St Francis of Assisi and the other of Christ crucified on the cross. Beneath the statues are inscribed the Franciscan vows of ‘Poverty, Humility and Obedience’.

The church of St Francis of Assisi, Goa is smaller when compared to its neighbour, the imposing Se Cathedral, yet makes up by the sheer beauty of its interiors, what it lacks in size. On the left at the entrance, is an intricately carved wooden pulpit, decorated with floral patterns. The church’s gilded interior is decorated with paintings, carved woodwork, additional statues and frescoes laden with intricate floral designs. The paintings depict events from the life of St Francis of Assisi and the history of the Seraphic Order.

Set into the floor of the church are tombstones, inscribed with intricate carvings, rich in detail.  It is a single-nave church with three small altars on either side of the nave. Behind the main altar is an ornate sacristy with the belfry to the north of the altar. The chapels and the gallery which runs around the top of the church are separated by internal buttresses. The Franciscan Convent, contiguous to the church, was built around 1527 and later expanded. Today it houses a Museum set up by the Archaeological Survey of India in 1964. On display are priceless sculptures and icons of the pre-Portuguese era, besides portraits of Viceroys and Governor Generals.

In its time, this beautiful church has borne witness to the rise of the Portuguese Empire. And then in more recent years, watched the sun set gently on its reign. Today the Church of St Francis of Assisi, Goa has come into a glory of its own, being designated as a World Heritage Site by UNESCO in 1986. To visit the church and the Museum is certainly worth the effort. Considering the richness and ageless beauty of its treasures, it would be time well spent.