The History and Origins of Christianity in Goa

For its third Webinar on 19th July 2020, Pilgrim Stays hosted two eminent personalities: Frederick Noronha, a journalist and publisher based out of Goa and Alan Machado Prabhu, noted historian and well known author. After having covered two of Christianity’s most prominent sites, the Vatican and the Holy Land, our focus shifted to the hugely popular destination in India- Goa.

You can view the video here:

This is the slide show from the event:

Goa is the top choice of tourists from India and across the globe for multiple reasons. Besides having some of the most beautiful beaches in the tropics, Goa’s Portuguese heritage attracts visitors who find the Mediterranean ambience irresistible. Ever since Afonso de Albuquerque ended the rule of the Bijapur Sultanate in this tiny enclave on India’s western coast, Goa saw the establishment of numerous cathedrals and monasteries on its soil.

The first church built to commemorate the Portuguese victory over the Sultan Adil Shah on 25 November 1510, was dedicated to St Catherine of Alexandria whose Feast Day it was. Many of the early churches such as Our Lady of the Rosary and Sao Pedro at Panelim near Panjim, were modest affairs. They were heavily fortified with thick walls and buttresses to withstand enemy attack, which in the early days of the Portuguese was a constant threat. 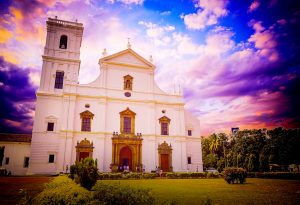 It was only later, as the Portuguese consolidated their hold that the majestic edifices that we see today unfolded. Employing varying styles like the Baroque, Gothic, Corinthian and Tuscan, Goa soon began to rival major European cities for the lavish scale of its Cathedrals. Having topography similar to Rome, Goa was frequently compared to this pre-eminent city of the Roman Catholic Church, which it now resembled in more ways than geographic. 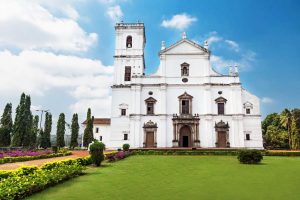 The Se Cathedral at Old Goa

The famous church of St Augustine of which only a solitary tower stands today amidst ruins, was considered the largest Cathedral of its times. It ranked high among the Imperial Cathedrals of the Renaissance era and was compared to the Monastery of St Vincent Fora in Coimbra, the medieval capital of Portugal. In course of time Goa was referred to as the Rome of the East, an epithet that was well deserved and due in no mean measure to the epic grandeur of its majestic basilicas and cathedrals. 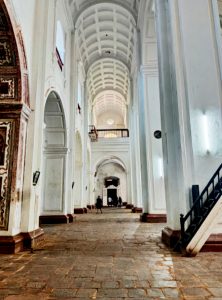 The corridors of the Se Cathedral

Alan Machado Prabhu began his segment by underlining the importance of Goa in the Catholic world, more specifically the Roman Catholic one. The early Church was a multi-polar one and was administered by a Pentarchy based in the five major episcopal sees of the Roman Empire: Rome, Constantinople, Alexandria, Antioch and Jerusalem.

Christianity came to India with the arrival at the port of Muziris of the Apostle, St Thomas in 52 AD. Small communities of Christians existed in the Malabar after the martyrdom of St Thomas at Mylapore, and these were referred to as the Nasranis or St Thomas Christians. In the 4th century, Persian missionaries of the East Syriac Rite, which was to later become the Church of the East in 410 AD, visited Kerala and Sri Lanka and organised these scattered communities into churches with an established hierarchy. 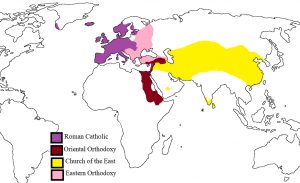 Map showing the spread of different forms of early Christianity

Although not much is known about the arrival of Christianity in other parts of India, it is certain that Christianity reached India by overland routes. By the time of the founding of the Sassanid Empire in 224 AD there were communities of Christians in northwest India and areas bordering Iran which today are Afghanistan and Baluchistan. The Sassanid Empire was the last Persian one before the arrival of Islam in Iran. India had long established trade links with the kingdoms of the Middle East and the Mediterranean besides Central Asia. The mountain passes in the northwest and the coastal sea lanes were traditionally used to carry out this trade. It is quite possible that Christian merchants from Persia settled along the trading routes in India. 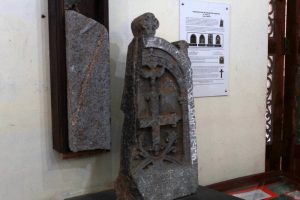 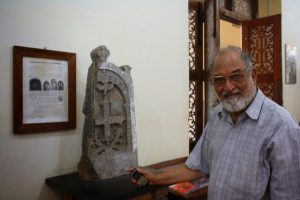 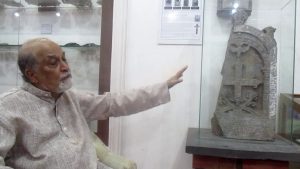 Early Christianity in Goa: The discovery of a cross with Pahlavi inscription in 2001, at Agassaim, near Pilar in Goa, sheds further light on the existence of a Christian community there in the 4th century, well over a thousand years before the arrival of the Portuguese. Pahlavi is an Aramaic derived script and was used to render several Middle Persian languages. The pattern of the cross is typically Eastern Orthodox and is similar in appearance to the ancient St Thomas crosses that exist in many parts of Kerala. 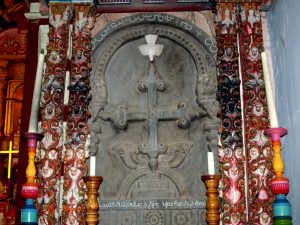 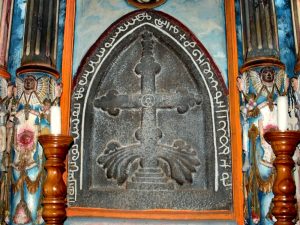 St Thomas crosses found in Kerala, which are similarly inscribed in Pahlavi

It was the contention of Alan Machado, that the spread of Christianity in Goa under the Portuguese was a part of state policy. The sword was first used to acquire territory, which was then followed by the cross to gain new converts among the subjects of the captured lands. With this kind of state patronage it was easier for Christianity to make deeper inroads and thrive. Alan Machado compared this with the previous arrival of Christianity, when it spread through Persian merchants plying their trade. This was an intercourse brought about largely by trade or intermarriage into the communities that they had settled in. 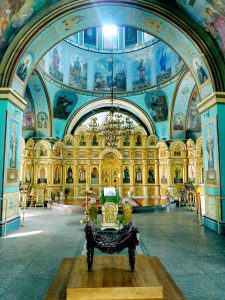 Inside an Orthodox church

Not much remained of Eastern Orthodoxy in Goa by the time of the arrival of the Portuguese, although there are various references to it having existed as late as the 1300’s. The Dominican missionary and explorer, Jordan of Severac, wrote in his seminal work Mirabilia (1329-1338), about flourishing Christian communities along India’s West coast. Jordanus went on to become the first Bishop of India, when he was appointed Bishop of Quilon the first Roman Catholic diocese in the whole of the Indies. 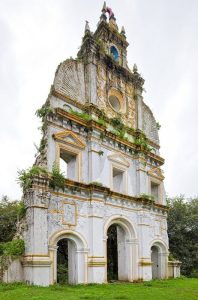 The ruins of Our Lady of Health Church, Sancoale, Goa

There is also an account by Odoric of Pordenone, an Italian Franciscan friar who landed in Thane, near Mumbai around the year 1321. He then travelled across India on his way to Sumatra in Indonesia. There are mentions of Christian communities on India’s west coast in Odoric’s account of his travels. When the Portuguese found Eastern Christianity still existing in Goa, they set about dismantling it and assimilating its adherents into the Latin Church.

The team at Pilgrim Stays was pleasantly surprised by the level of interaction with the audience. Indeed, our esteemed panelists seem to have touched upon a topic that resonated well with viewers.

Christianity in Kerala: A Historical Perspective » Pilgrim Stays
Log in to Reply

[…] one on the Vatican here. This was followed by the second webinar on the Holy Land and more recently on Goa. As usual the audience was held spellbound by the depth of knowledge of the speaker. Enthusiasm ran […]

Monthi Fest: The Nativity of Our Lady » Pilgrim Stays
Log in to Reply